It shouldn’t be hard for atheists to deliver secular invocations.

Yet, in places like Greece, New York, town officials have worked to deny atheists that opportunity — even after the Supreme Court decision.

Indra Zuno (below), an activist from Los Angeles (who spoke at the 2012 Reason Rally), didn’t think it would be very difficult at all.

For more than a year now, she’s been trying to deliver an invocation at the weekly meeting of the Los Angeles Board of Supervisors. And for most of that time, they’ve ignored her.

It began last July with an email to her representative Zev Yaroslavsky: 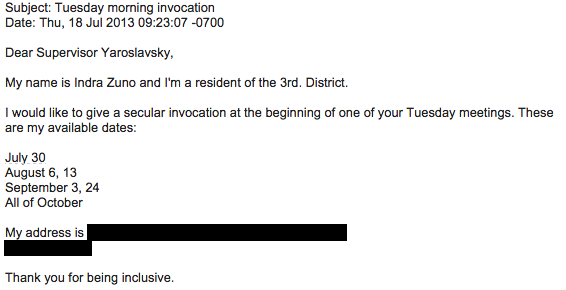 She got no response. So she sent a follow-up email a few weeks later:

That didn’t work. So she sent something via snail mail: 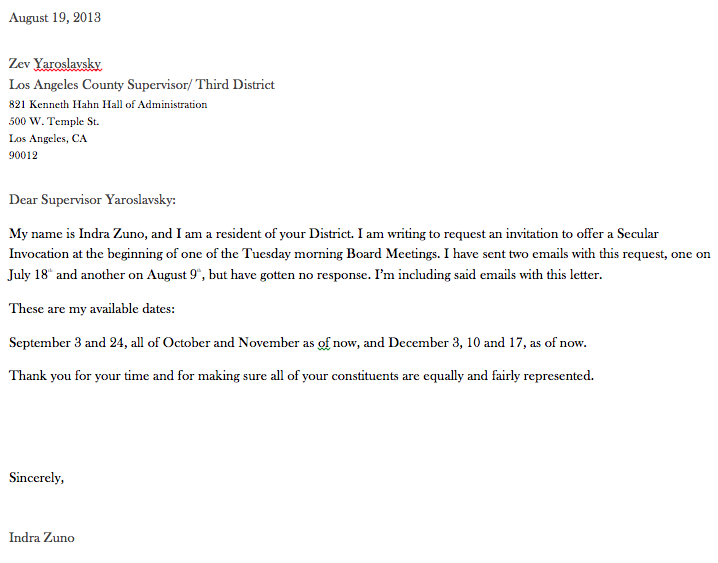 No response. So she hand-delivered that same letter to the board office. Zuno was eventually told someone would respond to her by January after a review… but that never happened. So she sent another letter to Yaroslavsky’s personal office in February. (Are you seeing a pattern yet?) 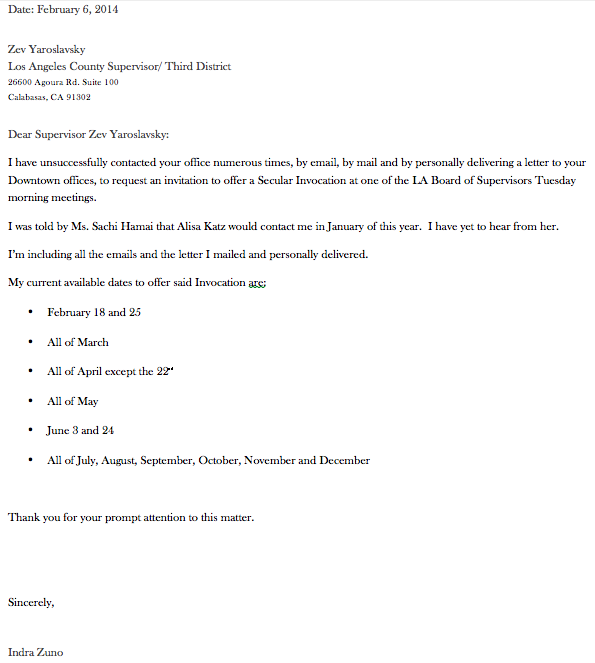 That must have done it! Because the board finally responded to her… to tell her she was rejected.

The invocation is an opportunity to invoke divine or spiritual guidance, give blessings, or offer an affirmation, and introduce a solemn tone in anticipation of the Board meeting. Invocations must be non-sectarian, and may not be used to advance a particular belief or disparage any other belief. Further, it is not a time to express political views, attack County policies or practices, or mock County policies or practices.

… Your request did not include information about yourself, or your affiliation with any recognized religious, spiritual, or community group. Please provide this information so that you may be fully considered as a potential invitee.

Keep in mind Zuno never said she wanted to disparage anyone’s views or promote her atheism.

Finally, the American Humanist Association’s Appignani Humanist Legal Center got involved. Attorney Monica Miller sent a letter to the board:

Over the following months Ms. Zuno patiently waited and occasionally inquired regarding the status of her request, but was consistently met with unresponsiveness and delay. Despite her sincere interest, cooperation, and persistence, no attempt was made to work constructively with her, and she was finally denied in a bureaucratic and dismissive manner. Unfortunately, this series of events can only be construed as reflecting an unfair and unlawful bias against Ms. Zuno’s secular views.

The LA County Office of County Counsel eventually responded to that in May. They said they weren’t formally rejecting her, and Zuno just needed to resubmit information about herself and her affiliation with a Humanist group. So that’s precisely what she did: 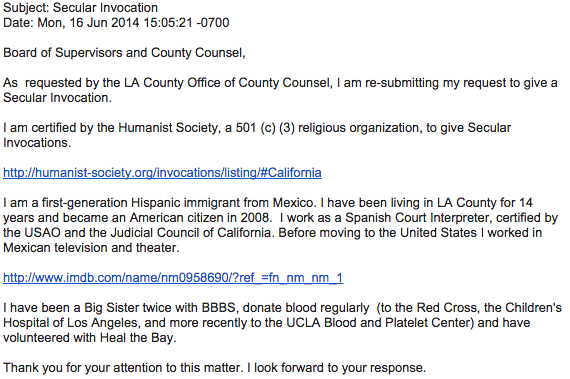 She sent them a hard copy of the same email a month later.

As of a few days ago, she still hadn’t heard back.

It’s incredible how many hoops Zuno had to jump through despite very clear requests to deliver the invocation. Even if the board argued that she wasn’t giving them all the information they needed, there was no attempt to communicate that information to her until some legal weight was thrown into the mix.

This week, Zuno called Yaroslavsky’s office twice to follow up on her requests. Yesterday, a staffer finally called her back to give her the good news: She would get to speak at the meeting on November 12. (Zuno is still waiting to get that in writing.)

But I promise you that no one whose first name is “Reverend” ever has to do this much work just to offer some words of wisdom at the beginning of a government meeting.