According to a recent paper by a Princeton economist and his colleagues, we can attach some numerical data to the battle between science and religion (or, rather, “patents per capita” versus how seriously the people there take religion):

“Places with higher levels of religiosity have lower rates of scientific and technical innovation, as measured by patents per capita,” comments [economist Roland] Bénabou…

[The paper] uses an economic model to explore how scientific innovation, religiosity, and the power of the state interact to form different “regimes.” The three kinds of regimes that they identify: a secular, European-style regime in which religion has very little policy influence and science garners great support; a repressive, theocratic regime in which the state and religion merge to suppress science; and a more intermediate, American-style regime in which religion and science both thrive, with the state supporting science and religions (mostly) trying to accommodate themselves to its findings.

It is in the process of this inquiry on the relationship between science, religion, and the state that the researchers dive into an analysis of patents, both in the United States and across the globe. And the results are pretty striking.

Even after the researchers controlled for factors like education and income levels, the correlations remained in place. The more religion in the region, the fewer patents per capita issued. That held true for both nations and states: 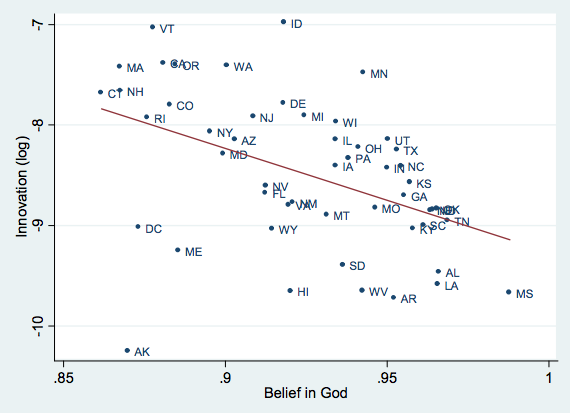 Does this mean religion hurts innovation? Maybe, but that’s not the whole story:

It is important to keep in mind that these findings are correlational in nature; the authors explain that they do not allow for “definite causal inferences to be drawn.” Their own view is that causation probably “goes both ways”: Religiosity stifles innovation, but at the same time, innovation and science weaken religiosity.

Policy may be the key here. Government has the ability to incentivize and jumpstart innovation, though it’s frequently subject to the religious views of elected officials (and the religious whims of voters). Government-funded stem cell research and NASA funding, for example, can lead to all sorts of scientific breakthroughs… but that funding can be dramatically decreased (or lost entirely) if there are Bible-based objections to spending the money there. And those of us in the U.S. are well aware of how certain state governments have hurt science education.

It’s just another piece of evidence showing how religion can be a negative force in society.