With Germany Changing How It Collects the Church Tax, Many Are Leaving Their Churches Altogether September 1, 2014 Hemant Mehta

With Germany Changing How It Collects the Church Tax, Many Are Leaving Their Churches Altogether

If you live in Germany, then you’re aware of something called a Church Tax.

As far as I can understand it — forgive me if I screw this up — here’s how this works: When you pay your income taxes, a portion of it (8 or 9%, depending on where you live) is set aside by the government for your place of worship if you’re Catholic, Protestant, or Jewish. (If you’re a theist, you almost certainly fall into one of those categories.) This amounts to several billion Euros for the Roman Catholic Church and various Protestant (Lutheran) churches. 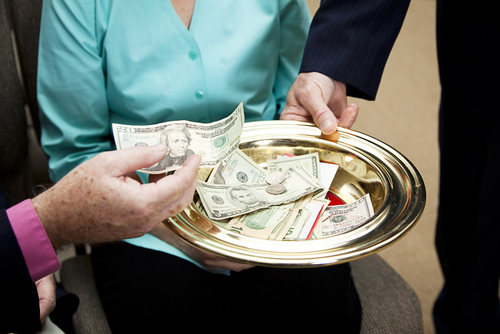 What if you’re not religious? No problem. That money won’t go to a church. In fact, you won’t have to pay the amount at all! But in order to be exempt, you have to officially declare that you’re not a member of those religious groups.

Recently, the government decided to simplify the process. Instead of you paying all your taxes, and the government taking some money out of there and handing it over to the proper place of worship, they’re having the nation’s banks do most of that work:

Under a simplified procedure starting next year, banks will withhold that premium from church members earning more than 801 euros ($1,055) in capital gains annually and pass it on to tax authorities for distribution to the churches.

In other words, the banks will withhold the money right off the bat and give that amount directly to government officials, who will then hand it over to the houses of worship. It streamlines the whole process, without there being any change in how much money is given.

One German reader explained the situation this way:

Beginning next year, the banks will get automatic notifications about your religious affiliation, so they can also send the church tax on interest to the finance offices. This caused some stir in Germany due to our strong privacy laws. People didn’t want their bank to know their religious affiliation.

Guess what’s happened since the banks informed people of that change?

The first half of 2014 saw a further upsurge of people leaving both the Catholic and Protestant Churches in Germany.

Ten thousand Protestants formally left their Church in Berlin, more than the total number in the whole of 2011 and 2012, and in Catholic Bavaria 14,800 left between January and June compared to 9,800 during the whole of 2013.

(And that’s on top of all the Catholics who left the Church earlier after learning about the “Bishop of Bling.”)

It turns out when you can see the money the bank is withholding right there in front of you (as opposed to it being a percentage of a larger sum that’s already out of your hands) — and you have a choice between keeping it and signing it over to your church — many people are realizing they don’t take religious that seriously. (One reader informs me that part of the issue is that many Germans didn’t even know about the Church Tax until they received the letter from the banks.)

The Catholic Church says that those who opt out of the Church Tax won’t be able to receive the sacraments, get married in the Church, or even have a religious funeral.

But if you were only nominally Catholic to begin with… who really gives a damn?

“… [The churches] should ask themselves why such a personal decision as belonging to a church is reduced to the issue of capital gains tax,” said Thomas Lange of the local banking association in Duesseldorf.

It raises an interesting question: If the United States said a portion of your taxes would be going to your church if you designated one, how many Americans would suddenly declare themselves non-religious (or at least without a church)? I suspect the percentage of “Nones” would rise up significantly.

It seems many Germans call themselves religious for the same reason we do — it’s tradition — but when push comes to shove, they’re admitting they don’t need their house of worship that badly.

(Image via Shutterstock. Thanks to Scott for the link and thanks to my German readers for helping me understand the basics of the law)

September 1, 2014
Jewish Lev Tahor Sect, Where Child Abuse Is Allegedly a Way of Life, Gets Kicked Out of Guatemalan Town
Next Post

September 1, 2014 Is This Pastor Being Honest About What He Said at a Secular Event?
"Like complaining about polio and then saying you can't vaccinate"
Thomas Grove Catholic Bishops Condemn Pro-Choice Joe Biden ..."
""They're more like a guidelines anyway.""
NOGODZ20 Montana Man Who Tore Down Ten ..."
"Biden should tweet back that the catholic church really has no legs to stand on ..."
Thomas Grove Catholic Bishops Condemn Pro-Choice Joe Biden ..."
"True."
democommiescrazierbrother COVID-Spreading Preacher: Joe Biden is Promoting ..."
Browse Our Archives
What Are Your Thoughts?leave a comment