Earlier this week, Paul Tjaden delivered a secular invocation at a meeting of the Lake County Board of County Commissioners (in Florida). It begins at the 1:53 mark of the video below: 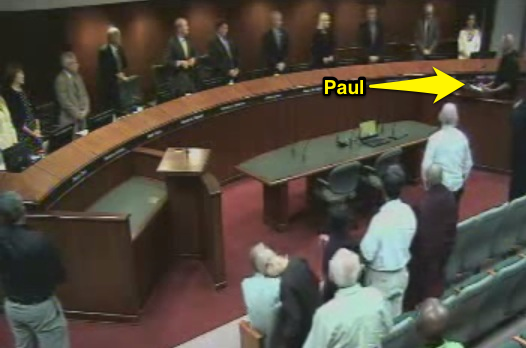 Members of the County Commission and staff, citizens and guests of Lake County, for today’s invocation, rather than bowing your heads, please take a moment to look around at others who are here this morning. Fifty years ago, had you done that, the people you’d be looking at would be folks pretty much like yourself, people who had grown up in Lake County and who shared the same faith and culture.

But, since then, our community has seen incredible growth. People have moved here from other states and from countries and cultures around the world. We have citizens who are Christian, Jewish, Hindu, Muslim, Buddhist, Wiccan, and people who profess no religious belief at all.

Because of that, I believe that any prayer in this diverse setting could cause at least some of our citizens to feel like outsiders, that they had entered a place where their requests or problems might be considered with suspicion or indifference because their beliefs differed from the majority.

Because of this, and in respect to all our citizens, I come before you not to pray, but instead to invoke the spirit of goodwill between all of us. To be sure, we don’t agree about everything and sometimes we feel fiercely protective of what we do believe. But there’s one thing on which we can all agree: we share the goal of making our Lake County the best place it can be.

One local resident took offense to his invocation:

Sitting in the County Commission chambers this week, Gail Boettger couldn’t believe it when the meeting began not with a Christian prayer but with a secular invocation.

Later, addressing commissioners on another matter, Boettger, of Howey-in-the-Hills, expressed her disappointment.

“America was founded on Judaic-Christian principles and values. I will not apologize for that,” she said. “Our founding fathers of this great United States of America, they prayed.”

She doesn’t have to apologize, but she might want to read a book to cure her ignorance.

Tjaden is a member of the Central Florida Freethought Community, a group that’s organizing several more secular invocations all over the state. You can see their running list — along with a compilation of transcripts of secular invocations around the country — right here.

August 31, 2014
You Don't Need God to Experience Spirituality
Next Post

August 31, 2014 I Spoke at a Church Last Week and Didn't Even Know It
Browse Our Archives
What Are Your Thoughts?leave a comment