How do your religious beliefs affect your views on the government? Should the government play a role in regulating morality? How about the economy, in terms of having a bigger, more involved government or a small, less involved one?

Tobin Grant at Religion News Services offers a conversation started with this very dense, highly informative chart tracking all of the major religions in the U.S. and where they typically stand on this issues based on their responses in the Pew Forum’s Religious Landscape survey. (The bigger the circle, the more members of that religious denomination.)

Not surprisingly, non-religious groups (yellow circles) don’t want the government making any moral judgments, though they vary when it comes to the size of government.

Think Progress’ Jack Jenkins notes that there’s a correlation (with some exceptions) between the placement of the circles and the relative incomes of the people in each group:

Historically black Protestant denominations, for instance, are shown as having a high percentage of congregants (roughly 47 percent) who make less than $30,000 a year. This income bracket disproportionally benefits from crucial social programs such as the Affordable Care Act and the Supplemental Nutrition Assistance Program (a.k.a., food stamps), so it makes sense that denominations such as National and unaffiliated Baptists show up as overwhelmingly in favor of a government that offers more services. Similarly, White Mainline Protestants such as the United Methodist Church, the Episcopal church, and the Presbyterian Church (USA) have some of the wealthiest congregants in the country (36 percent of White Mainliners make over $75,000 a year) who don’t usually come in contact with many social services. As such, it’s not entirely surprising that they skew towards the “smaller government, less services” section of Grant’s scale. Meanwhile, Catholics, whose numbers include a relatively even distribution of income brackets that closely matches the national average, are situated roughly in the center of the chart.

None of this, of course, automatically suggests that where you go to church influences how you feel about the government (or vice versa). But your income may indeed shape some of your views.

(Thanks to Matthew for the link) 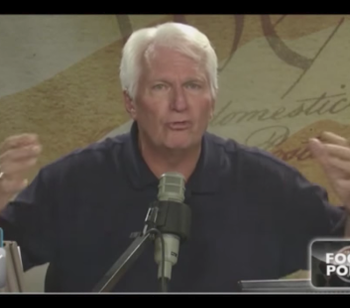 August 30, 2014
Bryan Fischer: Jesus is the Force Holding the Universe Together
Next Post

August 30, 2014 There's Even More Religion Than We Thought in Fort Gordon's Army Substance Abuse Program
Browse Our Archives
What Are Your Thoughts?leave a comment