Yesterday, I posted about how military personnel at Fort Gordon in Georgia who were struggling with drugs or alcohol may be directed by their superiors to go into the “Army Substance Abuse Program” (ASAP):

The problem was that one of the recovery “tools” they were given was a copy of Pastor Rick Warren‘s book The Purpose Driven Life, all about how Christianity gives you purpose in life.

Today, I received an email from a graduate of the ASAP program. Not only did he confirm the giveaway of Warren’s book, he told me that his “certificate of completion” included the Serenity Prayer:

God, grant me the serenity to accept the things I cannot change,

The courage to change the things I can,

And the wisdom to know the difference.

It’s a poem that’s often used in Alcoholics Anonymous programs, and we’re all well aware by now that many of the Twelve Steps are religious in nature.

I’ve removed all identifying information in the picture below: 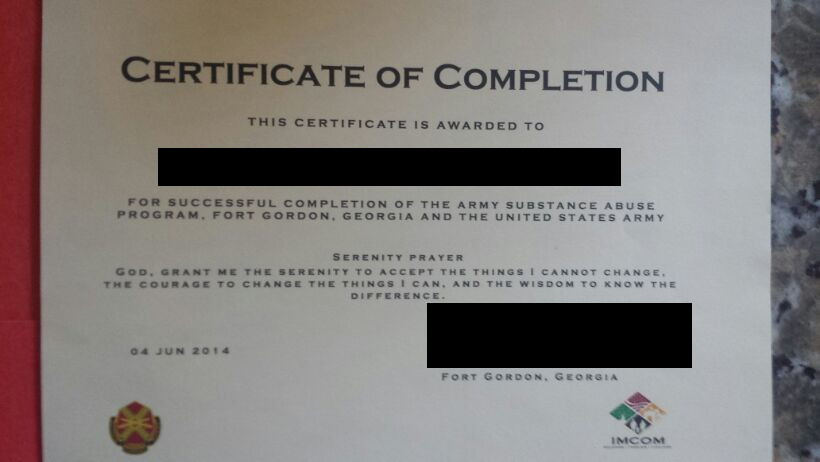 My contact also told me that program leaders gave him a copy of As Bill Sees It, written by the AA founder and full of references to God.

In case it isn’t clear, there’s absolutely no reason religion should be brought into a government program, especially one designed for those who are already struggling. They don’t need to replace one bad influence with another.

Fort Gordon officials need to take another look at how this program is run and revise it quickly before they’re hit with a lawsuit.

August 30, 2014
This Chart Shows How Every Major U.S. Religious Group Feels About Government Involvement in Moral & Economic Issues
Next Post