The Freedom From Religion Foundation sent letters earlier this year to schools in Florida’s Orange and Seminole counties warning them about that problem (among several other issues). The districts are finally getting around to tellings coaches they can’t have team chaplains and the pastors are not taking the news well:

Pastor Troy Schmidt, who has been working with the Olympia High School team for at least six years, replacing other chaplains, said he still plans to prepare meals for the team with his church, First Baptist of Windermere.

“My heart is with Olympia. I love the kids,” he said. Until last week, he had served as a spiritual adviser to the team, including leading them in prayers and said he never got a single complaint.

“Everything I’ve done has been centered around the Bible, but I’ve tried to apply it to football,” Schmidt said. “I know I’m speaking to Christians, to Muslims, to atheists. I’m speaking to teenagers who are at that important phase in life where they’re making critical decisions.”

He just admitted the problem: He’s a Christian leader being brought in to lead the students in prayer. It’s not surprising that no one has complained since who wants to be the student who rocks the boat and gets punished for it (officially or socially)?

Schmidt appeared on Fox & Friends this morning, by the way, to talk about how he’s being turned into an “atheist chaplain” because he can’t promote Jesus at a public school. Because, in his warped mind, that’s the same as being forced to tell students God doesn’t exist:

(To state the obvious, no one’s telling anyone to become an atheist against their will.)

Another pastor, Todd Lamphere of The Venue Church, still lists team chaplain as part of his job description: 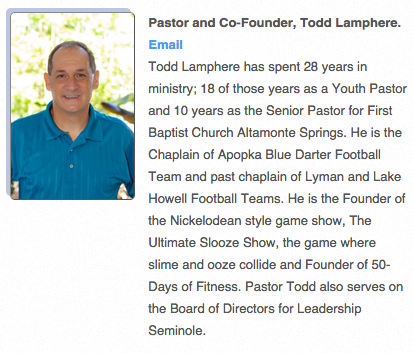 This shouldn’t be a difficult issue. Students are welcome to drop by the church if they want spiritual guidance from a Christian. There’s absolutely no reason to have a religious leader pray to a Christian God with the team, though. Their hearts may be in the right place, but the law matters more.

The students, as always, as welcome to pray on their own. No one’s stopping them. No one ever has.

August 28, 2014 Megachurch Pastor Uses Drone Imagery to Convince People to Come to Church
Browse Our Archives
What Are Your Thoughts?leave a comment