Georgia Pastor Breaks Law to Promote His Church, Then Complains When City Threatens a Lawsuit

Here’s a perfect example of a Christian who thinks the law doesn’t apply to him because he answers to a Higher Power.

Sonny Serigney, pastor of Fellowship Baptist Church in Grovetown, Georgia, wanted to promote his church, so he installed a 19,000-bulb LED sign on church property to do just that: 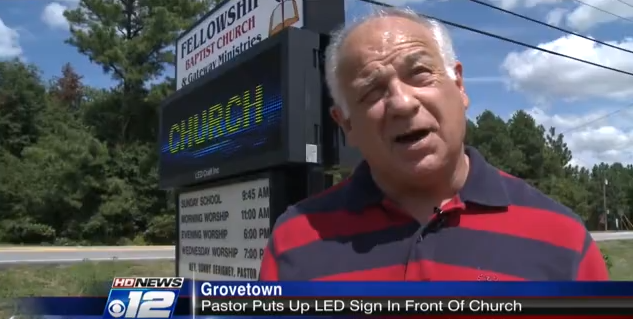 The problem is that the city bans all LED signs larger than 16 square feet. Serigney would’ve known that if he applied for a permit, which he didn’t. As it stands the sign is illegal, but Serigney put it up anyway because… Jesus:

It’s a sign illegally in place, but the pastor can’t help but fight for what he believes in.

“You want me to be honest, because I wanted to honor my lord,” he said.

Grovetown Mayor, George James the third, wouldn’t go on camera but tells News 12, if the pastor doesn’t take the sign down, it could end in a lawsuit.

Serigney responded saying, “We still have the freedom and the right to proclaim the good news of God, and that’s all I want with this sign.”

He’s trying to be a hero even though no one’s coming after him. It’s pathetic, really. It’s certainly not religious discrimination since the law applies to all buildings in the city.

Why is it so hard to understand that belief in Jesus doesn’t exempt anyone from following the rules everyone else has to obey?

August 28, 2014
Would You Still Fight Religion If It Did Nothing Worse Than Provide Comfort?
Next Post