Despite a Legal Complaint, This Georgia School District is Still Pushing Christianity on Students

It’s been weeks since we learned that Christianity was the glue binding together the Chestatee High School football team in Gainesville, Georgia. The American Humanist Association’s Appignani Humanist Legal Center even had pictures of coaches involved in a team prayer, a Bible verse quoted on the team’s workout log sheet, and cheerleaders hoisting banners with Bible verses on them.

Last week, district Superintendent Will Schofield told a local newspaper that he didn’t care for the AHA since they lived “a thousand miles away,” ignoring completely that the AHA was prompted to act by someone in the district. However, he reminded all faculty members that they could not lead “students in prayer during school or school-sponsored activities, nor may they require or pressure students to participate in religious activities.”

That didn’t address all the concerns, though. (For one, coaches also can’t participate in team prayers, but the superintendent didn’t mention that at all.) Earlier this week, the AHA received an official response back from the district referencing an email sent to faculty members reminding them of the law (which, as stated, didn’t address all the concerns) and mentioning that the coach involved in these shenanigans was no longer employed by the district and these issues were all water under the bridge.

Today, however, the AHA hit the district with another bombshell:

They know the prayers are still happening. They even have a picture of it going on — with coaches participating — from a scrimmage game two weeks ago: 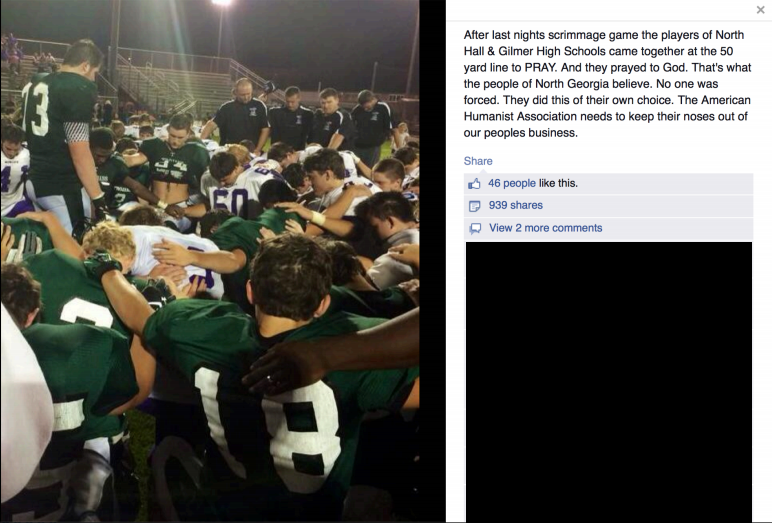 That was after the AHA sent its initial letter, by the way.

More importantly, several current and former students at the school have contacted the AHA since its initial letter to complain about the overt Christianity exhibited by the faculty members:

Since we sent the letter, we have received numerous emails from current and former students in the School District confirming that these practices have been ongoing, pervasive, and longstanding. One student informed us that a high school wrestling coach often led group prayers with students and would tell the students “religious stories” disguised as motivational speeches. Another student reported that a Christian-themed prayer was almost always included before the Chestatee High School marching band performances, usually prompted by the band director. At least one of the drummers in the band reportedly was a Muslim. The marching band student informed us of the following:

[T]he entire school was very religious, heavily biased towards Christianity… My sister who does not associate with the Christian religion either actually pretended to be Christian for a good year for fear of being ostracized by her friends… As part of the marching band, I often felt very out of place. The Christian religion was heavily seeded into the program and bothered me from the start. There would always be a prayer before each performance, usually led by a student, but often prompted by our band director. Chaplain actually became a leadership role one could be elected to in the band’s student leadership.

The student, like many others, thanked the AHA for trying to make “Chestatee High School a place where people who are non-religious like myself and those who associate with other religions can feel more comfortable and open about their beliefs.”

The AHA is suggesting the district take three actionable steps:

1. Adopt a written policy prohibiting teachers, coaches and other school officials from leading, endorsing, facilitating, and participating in prayer with students;

2. Eliminate all religious references from official team documents and promotional
materials and adopt a written policy prohibiting the same;

3. Enforce said written policies by monitoring games and practices and by sanctioning school officials for non-compliance with the penalties assessed for similar school code violations.

They also suggest sensitivity training for faculty members. Any decent school district would already have these policies in place, but when Christianity is entrenched within the culture, it’s not surprising to see these violations happening.

The ball is in the district’s court. It’s up to them to fix the problem they created.

August 27, 2014
Help Me Track Legislation in Every State That Threatens Church/State Separation
Next Post