[Note: All links in this post should be considered Not Safe For Work!]

Egyptian women’s rights activist Aliaa Elmahdy isn’t afraid of a little controversy, to put it mildly. For a few years, she’s been issuing bold fuck-yous to the forces of patriarchy and religion, appearing without clothing (and often with slogans on her body) on Facebook and in a Swedish mosque.

On Saturday, Elmahdy, who’s been living in exile in Europe, posted her most daring and controversial photo yet. She is seen squatting over a black ISIS banner that contains the words “There is no God but Allah.” Elmahdy is menstruating on the flag, while a second woman, dressed in an Islamic veil, simultaneously defecates on it while holding up a middle finger to the camera. This is just a crop: 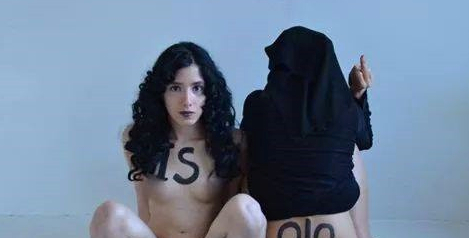 Aliaa Magda Elmahdy did not specify why she posted the photo, though past controversies, such as a 2011 incident in which she posed in only stockings and red shoes for her blog — to protest against Egypt’s conservative culture — suggest that she was opposing the Islamic State terror group’s brutally restrictive and misogynistic ideology.

I can hardly wait to hear how outrageous this ultra-defiant image is (especially from people who have hardly said a word about ISIS’ robbing, raping, and murdering their way through Syria and Iraq).

Nick Gillespie at Reason says of the photo:

When you consider what Theo Van Gogh was killed for and all the violence caused by the Mohammed cartoons, this sort of imagery becomes even bolder and more powerful than it immediately appears.

I fear that Islamic fundies’ target-for-murder list (which includes journalists, cartoonists, and novelists, none of whom match Elmahdi for sheer brazenness) has a new number one — with a bullet.

August 26, 2014 Pat Robertson Says Gay Teen Needs "Male Companions" To Be Straight
Browse Our Archives
What Are Your Thoughts?leave a comment