Today on The 700 Club, Pat Robertson gave unhelpful and unnecessary advice to a woman concerned about her teen stepson’s budding attraction to other guys.

Right Wing Watch tracked down the video of Robertson asserting that being gay is the result of nurture instead of nature and that it’s apparently caused by the absence of male role models in a boy’s life. Here’s the clip: 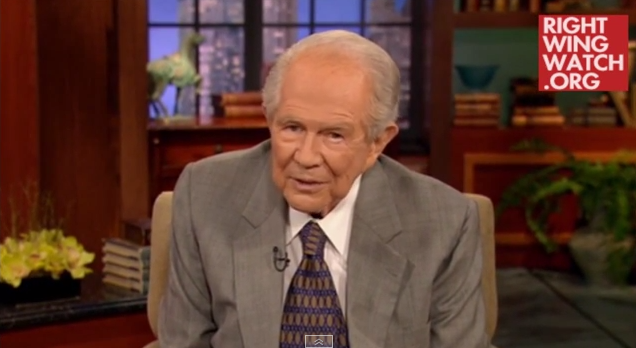 Recently my step-son told us that he is having crushes on boys. He is 13 and lives with his mother most of the time. How do we approach the situation? What are the next steps we should take? We have 2 other boys, ages 3 and 1. What is your suggestion?

Here’s what Robertson says in response:

I know a lot of people disagree with this. They think that they’re born that way. But I think nurture has a lot to do with it. I mean, he’s being raised by a mother. So his attraction is now toward other men because he’s raised by a woman.

I think before I did anything else, I would get him male companions. I’d get him some man to help him, some mentor or someone who cares about young men in a fatherly, older brother type of way, and let the kid grow up with a male role model and see what happens. Right now he’s being raised by a single woman and that may be skewing his orientation.

So… presumably straight single mothers turn their sons gay? As if a single mom’s attraction to the opposite sex is going to magically transfer over to her son because he has no way to “learn” attraction to women otherwise? (Poll for straight readers: At exactly what moment in your life did you decide to be heterosexual?)

Also, it’s disturbing the way he says “see what happens,” as if this whole thing is an experiment. Yes, sexual orientation is fluid, to an extent, but it’s not as easy as changing out a few variables and seeing what you get.

A casual reminder here that the vast majority of LGBT people are born to straight parents because — surprise! — the vast majority of people have straight parents. You don’t need a dad around to grow up to be a straight man. (One of my role models for the LGBT parenting movement is Zach Wahls, a straight Boy Scout who’s the son of two moms, but obviously there are thousands of other kids of same-sex parents who aren’t LGBT themselves.)

More importantly, if you grow up and you’re not a straight man, regardless of who your parents are, that’s okay.

Throwing a wrench in his “logic,” Robertson’s co-host points out that the child’s dad probably is in the picture, based on the tone of the letter:

You know, this is his stepmom writing this saying, ‘He told us,’ so that’s his dad… his dad could step into that role a little more in his life.

Maybe Robertson didn’t get that part? He agrees anyway.

His dad should, absolutely.

The correct “answer” to this nonexistent problem is simple: Let him be. Support him. Love your child as he is, for crying out loud. And never, ever ask Pat Robertson for parenting advice.