Fun to watch, if you like unhinged diatribes from Jesus-loving cops: 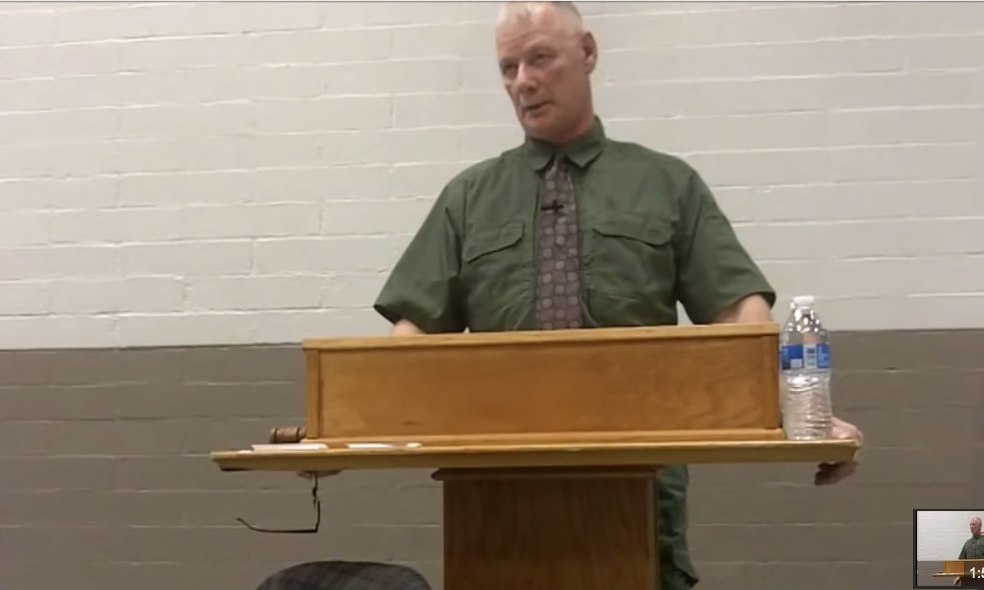 The spittle-spewing gentleman is Dan Page of the St. Louis County Police Department, addressing a gathering of Oath Keepers — and yes, you heard him just fine. In talking about his apparently beleaguered religious liberty, he alleges

There’s a couple out there in New Mexico right now that are being prosecuted and put out of business and were arrested because they refused to take pictures of sodomites. What about my freedom of religion from that?

That’s a reference to the wedding photographer who declined to take a female same-sex couple as clients. Here are the facts of the case. Surprise: the photographer in question was neither arrested nor prosecuted.

Page also has a problem with women in the military:

You have persecution, prosecution … the final phase is execution.

Now he’s rambling about Muslims (all of whom, he says, are itching to cut your head off) and how their end-times arrival was foreshadowed by the biblical tale of the Four Horsemen of the Apocalypse. One of those supernatural cowboys is said to ride a pale horse that Page assumes is actually green. Guess what? Green is the color of Islam. Uncanny!

Obama is allowing hundreds of thousands of them to come in every week.

Muslims, not Horsemen. So that would be more than 10 million Muslim immigrants a year at a minimum; at least 80 million over the course of the President’s two terms. Who knew? (The most plausible number of Muslims in the United States is around three million, but I concede that there could be at least another 80 million of them — equal to one quarter of the known U.S. population — who are being trained in secret FEMA camps, probably by African death squads under the control of Obama’s Kenyan relatives.)

In a longer cut of the video, at 2:37, Page can also be heard to unabashedly offer this statement:

I personally believe that Jesus Christ is my Lord and Savior. But I’m also a killer. I’ve killed a lot. And if I need to, I’ll kill a whole bunch more. If you don’t want to get killed, don’t show up in front of me.

Oath Keepers, by the way, claim to be

… a non-partisan association of current and formerly serving military, reserves, National Guard, veterans, Peace Officers, and Fire Fighters who will fulfill the Oath we swore, with the support of like minded citizens who take an Oath to stand with us, to support and defend the Constitution against all enemies, foreign and domestic, so help us God. Our Oath is to the Constitution.

If you’re a woman, a Muslim, or gay, do you reckon that when officer Page encounters you, he’ll defend your constitutional rights?

The St. Louis police department is not sure about that either, and, on the basis of his out-to-lunch speech, has suspended Page pending the outcome of an investigation that will likely include a psychiatric evaluation and a good deal of scrutiny by Internal Affairs.

August 25, 2014
Mississippi's Jackson Public School District Began the Year with Jesus at a Mandatory Event for Faculty Members
Next Post

August 25, 2014 We Now Have a Tumblr
Browse Our Archives
What Are Your Thoughts?leave a comment