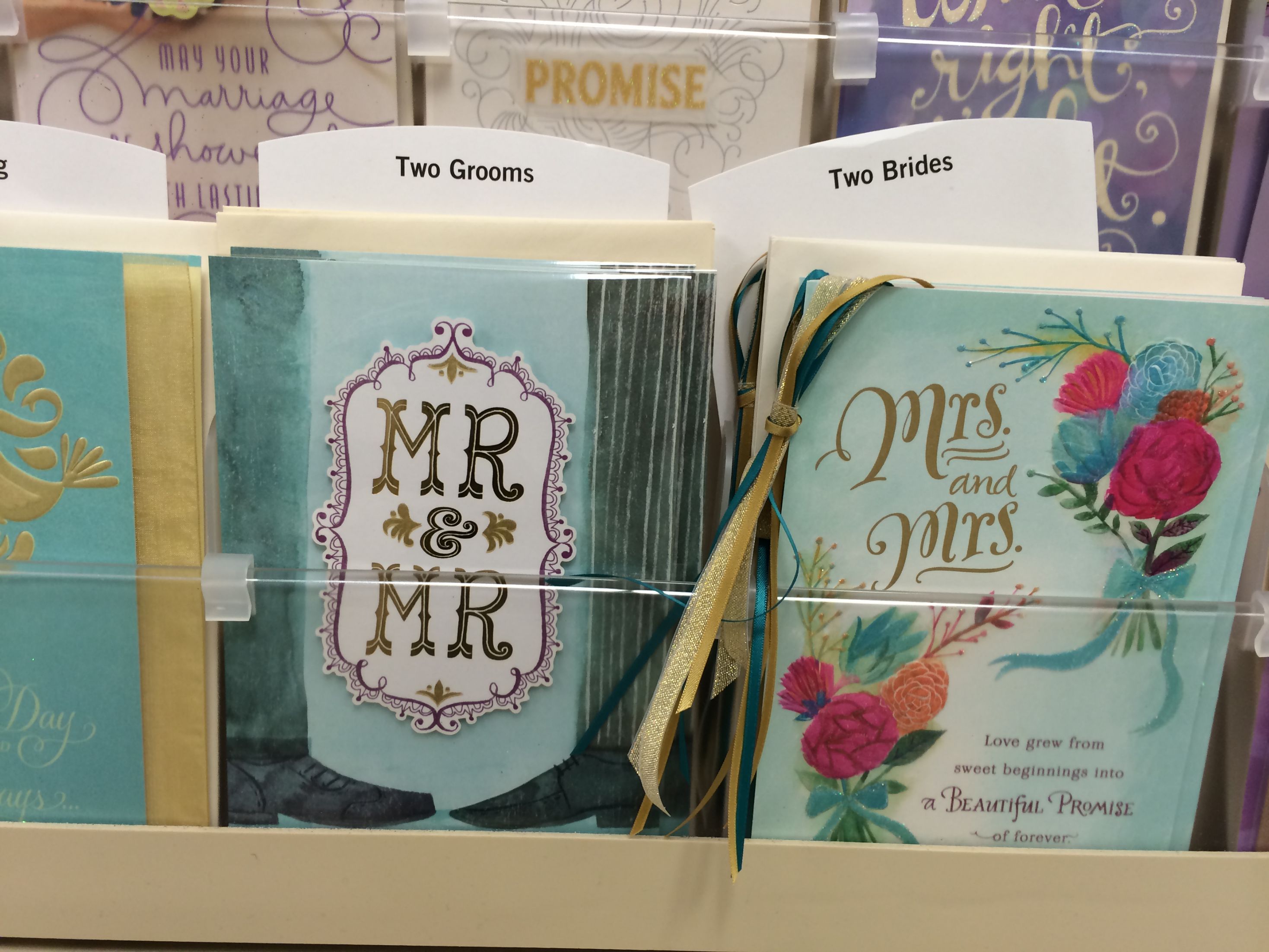 The Mormon-owned BYU operates under an “honor code” banning anyone from acting on feelings of same-sex attraction. According to BYU spokeswoman Carri Jenkins, the greeting cards — which read “Mr. and Mr.” or “Mrs. and Mrs.” — violated that code.

“Homosexual behavior includes not only sexual relations between members of the same sex,” [the code] states, “but all forms of physical intimacy that give expression to homosexual feelings.

Bookstore staff didn’t notice the cards until storegoers started posting photos of them online, no doubt tickled by the irony of pro-LGBT decor turning up on one of the most homophobic college campuses in the country. It’s unclear how or when the cards showed up in the bookstore, but it definitely wasn’t on purpose.

It wasn’t immediately clear when they were placed, but Jenkins said they weren’t up long. BYU staffers have spoken with the company about leaving similar cards off the school’s store shelves in the future. BYU doesn’t plan on ending its contract with Hallmark.

“This was just someone stocking the shelves who wasn’t aware,” [Jenkins] said. “We’ve been able to work with them.”

Nobody is surprised, of course, that BYU flipped out and took these cards off the shelves. The person stocking the shelves probably didn’t make the connection, but in my head, I’m going to pretend this whole thing was intentional and that some Hallmark employee is laughing maniacally at the ruckus s/he caused.

As always, BYU’s queer and allied students are managing to find a silver lining despite their school’s codified homophobia.

Samy Galvez, president of the group Understanding Same Gender Attraction (USGA) and a senior at BYU, said changes to the honor code in 2007 and 2010 allowed students to talk about their sexual orientation without fear of being expelled.

Though he declined to comment on the greeting cards, calling it an accident, Galvez said he generally has found a welcoming environment at BYU.

“I was really amazed to see how welcoming and how loving people are,” he said. “Even though you know people adhere to a standard of conduct of not advocating for same-sex marriage, at the same time that doesn’t mean they aren’t capable of showing empathy.”

I’d also like to point out two of the more interesting comments on the Salt Lake Tribune article.

Nice to know that things haven’t changed at BYU. When I was there in the 80s they pulled the Muppet greeting cards because there were complaints Miss Piggy was showing too much cleavage and wasn’t setting a good example of modesty.

And from user exmo88:

Okay, you knew that one was coming.