Two Americans Give God, Not Doctors, Credit After Recovering from Ebola

Yesterday, Dr. Kent Brantly, who caught the Ebola virus while doing mission work in Liberia, was released from the hospital with all expectations of a full recovery very soon. 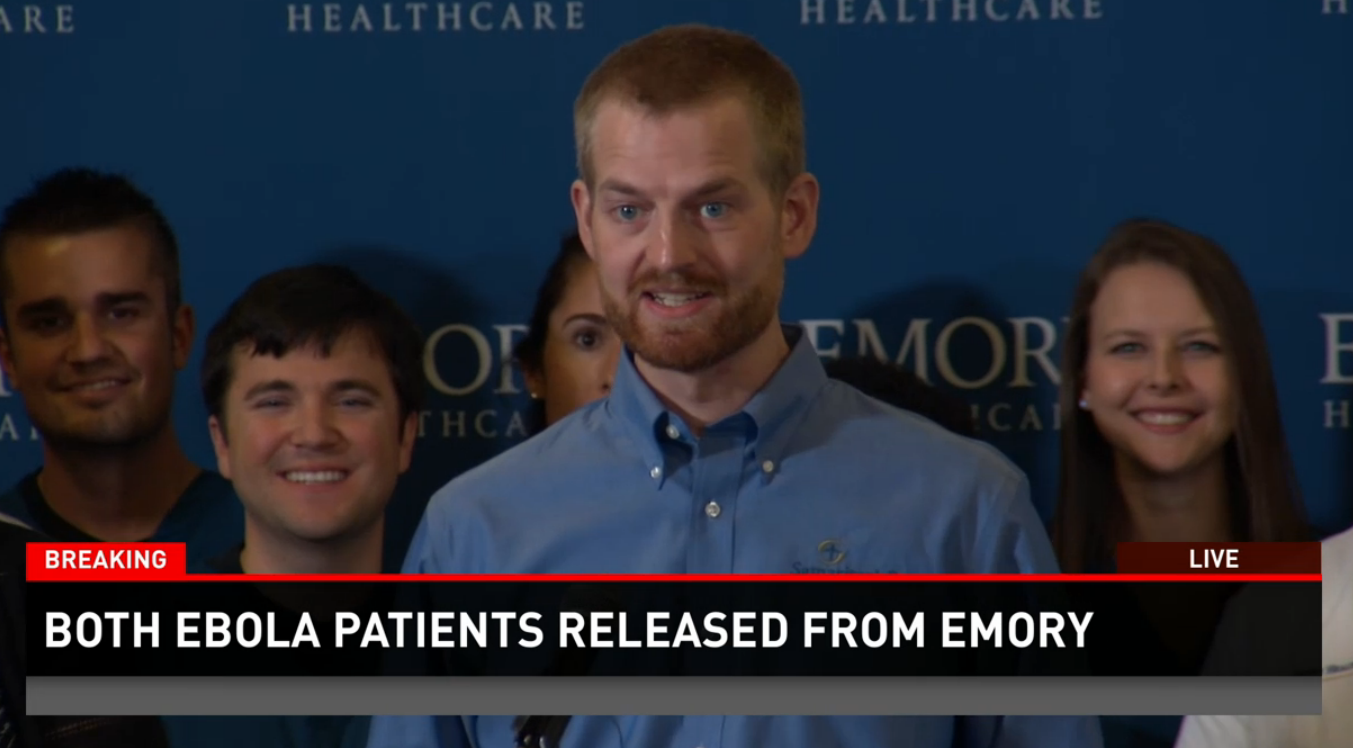 And he knew exactly who to thank: His doctors. God.

“As I lay in my bed in Liberia for the following nine days, getting sicker and weaker each day, I prayed that God would help me to be faithful even in my illness,” Brantly said. “Through the care of the Samaritan’s Purse and SIM missionary team in Liberia, the use of an experimental drug, and the expertise and resources of the health care team at Emory University Hospital, God saved my life.”

His doctors cautioned that it’s unclear whether the drug or a blood transfusion Brantly got from a young Ebola survivor in Africa was helpful.

“Above all, I am forever thankful to God for sparing my life and am glad for any attention my sickness has attracted to the plight of West Africa in the midst of this epidemic,” he said.

I know he’s a missionary, so that’s part of the script, but can’t we admit that the drug or the doctors helped a *little* more than Jesus? Yet, the way Brantly’s statement reads, all the medicine and care he received were part of God’s plan. (By that logic, wasn’t it also God’s will for him to contract Ebola in the first place?)

If it was really in God’s hands, I’d like to know why Brantly didn’t just pray away the Ebola while staying in Africa. And what God has against all the Africans Ebola patients He’s just allowing to wither away.

Some will say it’s impolite to bring any of this up, but giving a shout-out to God after surviving a tragedy may be the most natural, yet repugnant, thing to do. It wasn’t the grace of God that saved you. It was trained professionals, scientific breakthroughs, or just plain luck. There’s where the credit should go. There’s where all the credit should go. It’s just crazy that the things that actually saved Brantly’s life are treated as afterthoughts.

Daniel Dennett talked about this in a 2006 essay:

If you insist on keeping the myth of the effectiveness of prayer alive, you owe the rest of us a justification in the face of the evidence. Pending such a justification, I will excuse you for indulging in your tradition; I know how comforting tradition can be. But I want you to recognize that what you are doing is morally problematic at best. If you would even consider filing a malpractice suit against a doctor who made a mistake in treating you, or suing a pharmaceutical company that didn’t conduct all the proper control tests before selling you a drug that harmed you, you must acknowledge your tacit appreciation of the high standards of rational inquiry to which the medical world holds itself, and yet you continue to indulge in a practice for which there is no known rational justification at all, and take yourself to be actually making a contribution. (Try to imagine your outrage if a pharmaceutical company responded to your suit by blithely replying “But we prayed good and hard for the success of the drug! What more do you want?”)

I’m glad Brantly and Writebols are doing better. I wish others suffering from disease had the same care they received. But, despite their faith, it’s still frustrating that credit is given where it isn’t due.

August 22, 2014 Why You Shouldn't Teach Your Children That Hell is Real
Browse Our Archives
What Are Your Thoughts?leave a comment