Florida School Board Member Tells Pagan: If You Deliver an Invocation, I’ll Walk Out and Ask the Crowd to Join Me August 22, 2014 Hemant Mehta

Florida School Board Member Tells Pagan: If You Deliver an Invocation, I’ll Walk Out and Ask the Crowd to Join Me

Back in June, David Suhor (who calls himself an Agnostic Pagan Pantheist) spoke during an open forum for the Escambia County Board of County Commissioners (in Pensacola, Florida) and argued against the use of religious invocations. Eventually, he was invited to give an invocation of his own — which he accepted — but Suhor points out that the Board still screws up in other ways. They lead the prayers, they ask the crowd to stand, they make you jump through hoops to get on the invocation roster. (The Freedom From Religion Foundation sent the Board a letter on Suhor’s behalf.)

On Tuesday night, Suhor spoke to a different audience, the Escambia County School Board, saying that they were not very welcoming of non-religious viewpoints at all. He acknowledged that one board member invited him to deliver an invocation (though he had a conflict on that date), but that was a rarity: 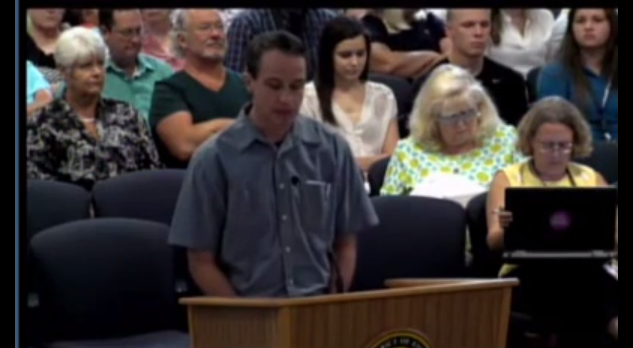 This board has a problem with diversity, religious discrimination, and following its own rules.

Since 2011, 100% of the invocation prayers offered at this meeting were of the majority religion. I’m not sure this board has ever had a prayer from a non-Biblical perspective. That’s probably because each of the school board members acts as gatekeeper, choosing and introducing their favored prayer givers. Of course, you all pray to the same, singular, paternal God.

So what? Well, when religious minorities (like myself) have asked to participate in the invocation (as is our right by law), we’ve mostly been thwarted for dubious reasons and in a way that discourages further participation. That’s illegal.

Under Galloway v Greece, a narrow 5-4 Supreme Court decision this year, invocations before legislative bodies were allowed to continue, but Galloway warns us that such prayers should not be coercive and must be practiced without endorsement, nor religious discrimination.

So, does the Escambia County School Board discriminate against minority religions? Let’s see — since I made my requests, I’ve had two answers of no, two no answers, and one yes. Thank you, Ms. Hightower, for accepting my offer without a religious test. Unfortunately, I have another commitment for November.

And now for the good news: there is a simple solution to ending discrimination here: ECSB’s own policy, from the Student Handbook. It says: “No person and no employee or agent of the District shall coerce, advocate, or encourage in any way whatsoever prayer or any other religious activity by students.”

We all know that students regularly attend these meetings. So, I’d like to challenge this board to follow its own rules; forget the “do as I say, not as I do” policy of leading prayer here alone. Just look to your own guidelines for an inclusive compromise — a moment of silence.

Again, from the Student Handbook: “The moment of silence is not intended to be, and shall not be conducted as a religious service or exercise, but shall be considered an opportunity for a moment of silent reflection on the anticipated events of the day.” That sounds perfect for this occasion and it respects everyone’s religious views without asking them to pray against their beliefs.

I would love to discuss Galloway more, but I’m running out of time. So in conclusion, I pray that this board will embrace this teaching opportunity and show our students that different faiths and none at all can coexist and thrive here. I pray our elected officials will refuse to favor one religious expression to the exclusion of others, and I pray you’ll follow the rules set forth for the rest of the school system so that everyone feels welcome at this meeting and so you may focus on the business of this board.

Not a bad speech at all. But the board isn’t about to switch to a moment of silence.

In fact, one of the board members, Jeff Bergosh, took to his personal website to write about how he has no intention of letting non-religious people deliver invocations:

I mean, should the majority of persons in attendance at one of our meetings really have to listen to a satanic verse? What if a “Witch Doctor” comes to the podium with a full-on costume, chicken-feet, a voodoo doll and other associated over-the-top regalia? It could easily get out of hand, so far as I can tell….(I wonder what our local media would say about this?)

And I won’t stay and listen if someone tries to be disrespectful like that. I’ll leave the room and come back after, or wear BOSE noise cancelling headphones. Or I’ll turn around and raise my fist in the air like the ’68 Olympians did(uh, I’m being sarcastic-I wouldn’t really do that…)…… I won’t be part of someone’s prank.

So we have to be careful about how this issue is managed.

Locally, I’ve been bombarded by people offering their willingness to give invocations lately…. However, as a current practice each board member has the latitude to select whomever he/she wants to deliver the invocation before the meeting. In my eight years on the board, I’ve utilized a priest, two pastors, a youth pastor, the leader of my bible study group, several members of the district staff, a school community volunteer, and I’ve delivered the invocation on a number of occasions myself. I like having the flexibility of the board’s rotation system, and I’m not in favor of changing it…

Did you catch all that? He’s so into diversity, he invited a whole bunch of people… to pray to Jesus! And all those other weird traditions have no place in a community like Escambia. (I’m sure they say the same about Christianity.)

Then, at the end of his post, Bergosh writes that he *might* consider opening up his circle of invitees…

I’d even be willing to select someone other than a Christian to deliver the invocation. I’ve recently been contacted by someone of the Jewish faith, and I’m considering having that individual bring the invocation when it is next my turn, in January 2015.

Well, isn’t he Mr. Generous… expanding his base from Christians to Christians and one Jew.

It gets even worse. After Suhor emailed the board and requested a chance to give an invocation, Bergosh took the opportunity to reply and tell him what he would do if Suhor ever spoke at a future meeting:

[I] have an idea that I’ll be posting on my blog in the next few days that will allow everyone to win, a true win-win situation. When you come to bring your Wiccan, Atheist, or Klingon invocation — I’ll politely excuse myself from the room and simultaneously invite anyone in the audience who wants to join me in a Christian invocation out back. You can give your invocation to those that want to hear it and stay in the room. Nobody will prevent you from your free exercise of your religion, just as I would expect for you not to attempt to block me from exercising my constitutional right to my Christian belief via a Christian invocation outside the back door. A win-win, right Dave?

Wow… how much of an asshole can you be while still staying within the confines of the law?

I promise you Christians never have to deal with politicians like these, who openly tell you how they’re going to walk out as you speak while encouraging the audience to join them.