Convert or Die: In Group Ceremony, Yazidis Swear Off Their Religion and Pledge to Worship Allah August 22, 2014 Terry Firma

Convert or Die: In Group Ceremony, Yazidis Swear Off Their Religion and Pledge to Worship Allah

Forced conversions to Islam are as old as the religion itself.

I’ve never understood why it works. Wouldn’t you quietly seethe with anger or stew in resentment over having been made to give up the sacred beliefs that you and your forefathers swore by?

I’m not puzzled by what brings about acute forced conversions. The threat of imprisonment, beatings, torture, rape, outcast status, and/or burdensome religious taxes ought to do it. But I don’t follow why the imposed religion ultimately takes hold, often within a generation. Virtually none of the African people who were captured and brought to North America as slaves were originally Christians. But they soon internalized forced Christianity to such an extent that, in the United States, they became regarded as exemplars of piety. Later, in our time, it emerged that

African-Americans are markedly more religious [that is, Christian] on a variety of measures than the U.S. population as a whole, including level of affiliation with a religion, attendance at religious services, frequency of prayer, and religion’s importance in life.

It would be wonderful if forced conversions were futile because people’s deeply-held religious beliefs (or the absence of any god belief at all) are impervious to brutal coercion. But chances are good that the Yazidis in this ISIS video, who are filmed as they are forced to swear loyalty to Islam (skip to 5:56), will be faithful Muslims in a dozen years or fewer. Their children almost certainly will be, if ISIS isn’t beaten back. 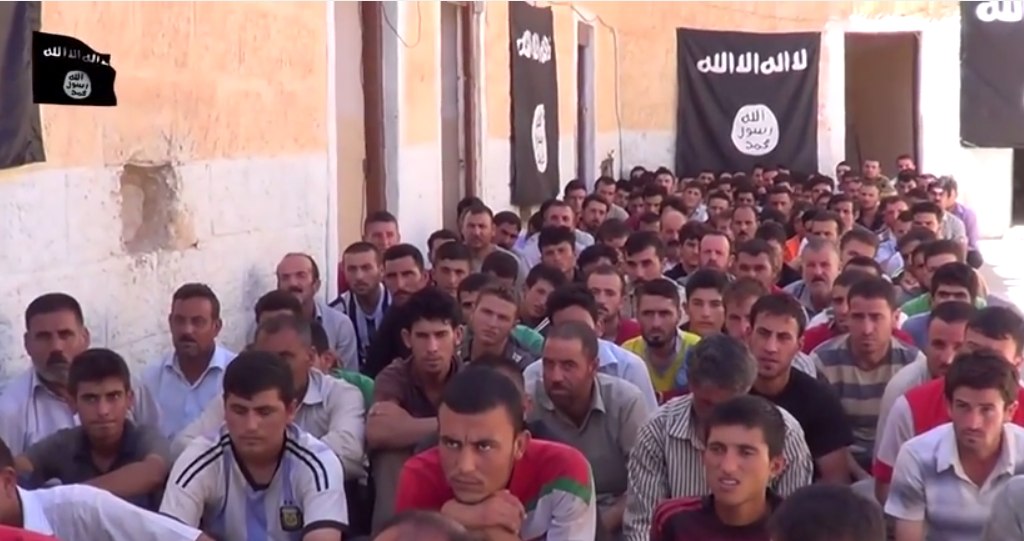 The video shows a group of about 60 men gathered in a hall listening intently to an Islamic State imam as he extols the virtues of Islam. Another scene shows the men praying in a mosque. Then the slickly produced video switches back to the hall, and two of the men are seen accepting the embrace of the imam, and holding up their index fingers, a gesture of solidarity adopted by the Islamic State.

Raising their middle fingers would be a better gesture. But that would bring certain death.

In an interview, the imam says the conversions are genuine. “I give you the glad tidings that there are many families who converted to Islam, and I met them. They are women, children, and elderly, and they are happy for converting to Islam.”

Yeah, just look at all those faces. Joy written all over them, right?

[T]hree of the converts also say they willingly changed their religion, and they urged other Yazidis who have fled the militant advance also to embrace Islam and return home. “You can say that we were in darkness and now we became almost, as it can be said, in the light. We see the Islamic religion as the true religion,” says one of the converts.

I wonder if that tireless chronicler of religious persecution, Todd “Woe is Us” Starnes, will spend even one word on the fate of these cowed and violated people.

August 22, 2014
Why You Shouldn't Teach Your Children That Hell is Real
Next Post