Ben Carson: Removing Bibles from Navy Hotel Rooms is the Same as Imposing Atheism on Everybody August 21, 2014 Hemant Mehta

Ben Carson: Removing Bibles from Navy Hotel Rooms is the Same as Imposing Atheism on Everybody

Ben Carson, the retired neurosurgeon who’s frequently touted as a Republican presidential candidate in 2016, has an article up at National Review about “Atheist Absurdities” and it features gems like this one: 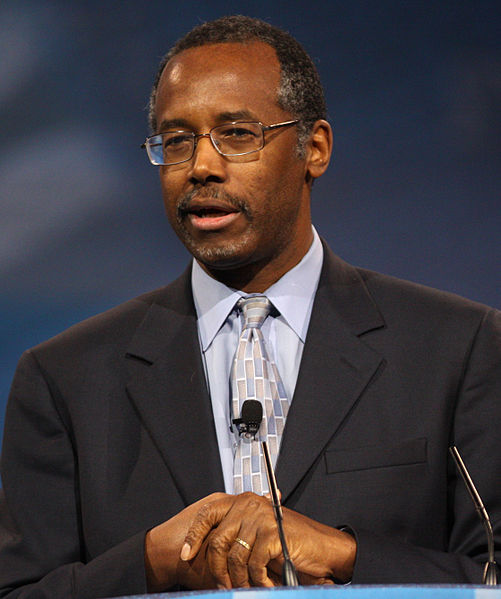 The surprise is not the hypocritical stance of the Freedom From Religion Foundation, but rather the fact that an established bulwark of American strength and patriotism caved to a self-serving group of religious fanatics. The previous sentence may seem out of place if you don’t realize that atheism is actually a religion.

It is extremely hypocritical of the [Freedom From Religion Foundation] to request the removal of Bibles from [Navy] hotel rooms on the basis of their contention that the presence of Bibles indicates that the government is choosing one religion over another. If they really thought about it, they would realize that removal of religious materials imposes their religion on everyone else.

Riiiiight. By that logic, turning the television off is the same as changing the channel.

FFRF is demanding neutrality, not the imposition of their own views. No one is suggesting the Bibles be replaced with copies of The God Delusion.

This is like saying there shouldn’t be certain brands of bottled water in hotel rooms because there may be guests who prefer a different type of water or are offended by bottled water and think everybody should be drinking tap water. The logical answer to such absurdity would, of course, be that the offended individual could bring his own water or simply ignore the brand of water he does not care for.

The comparison fails — as anyone who does the slightest research would know — because the government specifically cannot endorse religion. But if Carson thinks it’s a fair analogy, let’s put a copy of the Koran in every hotel room and let him bring his own Bible or ignore the Islamic holy book. I get the feeling he’d be the first one to complain.

Like so many of his conservative colleagues, Carson also thinks FFRF does this because they’re “offended” by the Bible, when the truth is they just care about the Constitution in a way that Carson clearly doesn’t:

As a nation, we must avoid the paralysis of hypersensitivity, which prevents us from getting anything done because virtually everything offends someone. We need to distribute “big boy” pants to help the whiners learn to focus their energy in a productive way. We must also go back and read the Constitution, including the First Amendment, which guarantees freedom of religion. It says nothing about freedom from religion…

That’s certainly not how the courts have interpreted it. Carson would know that if he stopped listening to David Barton. And it’s a semantic game anyway. The whole point is that we have freedom to believe as we want, and the government doesn’t get to impose a particular view upon the citizens. To turn that around and say it means atheists should get no say in how Christianity is foisted upon the public is dishonest and, well, what we’ve come to expect from Carson.

This guy makes Sarah Palin sound intelligent. Which means the Tea Party will love him come nomination time. How is it that a trained neurosurgeon still hasn’t figured out how to use his own brain to do some basic research before spouting off nonsense?

(via The Morning Heresy. Image via Wikipedia. An earlier version of this post accidentally referred to the hotels as hospitals.)

August 21, 2014
Christian Writer Says It's Hard to Imagine Vicky Beeching is Gay Because Men Find Her Attractive
Next Post