A Teacher Printed Out an Old Version of the Pledge for Her Students So, Naturally, Todd Starnes is Furious August 21, 2014 Hemant Mehta

A Teacher Printed Out an Old Version of the Pledge for Her Students So, Naturally, Todd Starnes is Furious

An elementary school teacher in South Carolina was leading her class in recitations of the Pledge of Allegiance and the National Anthem. But they’re kids. They don’t know all the words yet. So she decided to help them out by printing the words/lyrics for them.

Can you see the problem with this? Because one student’s mother sure as hell did, and she told Fox News’ Todd Starnes: 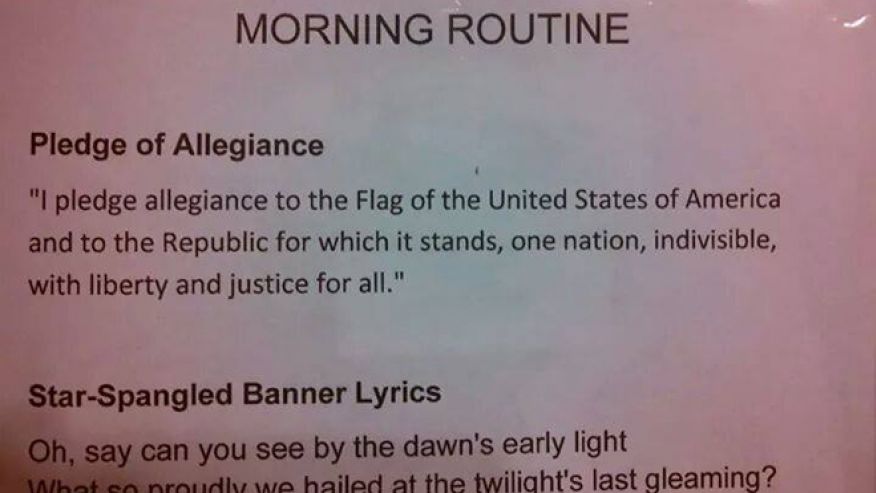 Jessica Andrews could not believe her eyes.

“It was like an ‘Oh my gosh’ type of feeling,” the mother of six from Aiken, South Carolina told me.

Turns out the teacher didn’t do it on purpose. She just found the words online and copy/pasted them into a document for the kids. I know that because that’s what she said.

But Starnes isn’t buying it.

Ah yes — the old “cut and paste” will get you every time.

The principal said as soon as the teacher learned her mistake, she sent a corrected version to parents — along with an apology.

“I do apologize,” the teacher wrote. “Please forgive me. I respect our country and what it was founded on.”

Jessica told me she used the incident as a life lesson for her little girl.

“I told her the government and a lot of people don’t like God,” she said. “Some people are offended by Christianity. I try to be as real with my kids about their faith as I can be. I don’t want to sugarcoat everything.”

We need more moms like Jessica Andrews. Thanks to her eagle eye she was able to facilitate change at Chukker Creek Elementary School.

Note that Starnes never mentions that the Pledge didn’t have the words “Under God” in it until 1954 — and never considers the possibility that the teacher obtained these words from a website referring to an older version of the Pledge. If he it aware of the Pledge’s history, he’s certainly not reminding his readers of that fact, because it would destroy his narrative that godless activists are out to destroy Christianity. He’s either completely ignorant or willfully deceitful. (In his case, I suppose it could be both…)

This is why he shouldn’t be trusted. He’s a “journalist” who already knows the conclusion before he does his research. And he’ll never let the facts get in the way of telling his pre-written stories.

August 21, 2014
A Simple and Beautiful Animation of How Life Began
Next Post