In India, according to a local news site,

A panel of seven members from various Muslim and Christian organizations came together on Tuesday to condemn the atrocities perpetrated by the Islamic State of Iraq and Syria (ISIS) and other outfits responsible for creating and supporting them, at a press conference held at Islam gymkhana at Marine Lines.

They have so far received 82 signatures from activists and leaders of various communities and professional organizations to support this cause.

Wow. 82 signatures. About half of them from Muslims, and the rest from Christians and Hindus, maybe? Is that awesome or what?

Maybe more is to come (the group will attempt to organize “multi-city rallies across India” to get its message out). And I don’t want to sound totally unappreciative — every Muslim who raises his or her voice against Islam-inspired violence, and bravely does so in public, gets my sincere thanks.

But I’m no Pollyanna. I still remember that, about ten years ago, Muslims in Lodi, California were going to organize a huge demonstration against the attacks of 9/11, in support of the families of the 2,977 victims who lost their lives that day. They would also condemn other violence perpetrated in the name of their religion. The organizers expected sky-high attendance and began calling their initiative “the Million Muslim March” (an optimistic name given that, depending on whom you believe, there are three to seven million Muslims living in the U.S.).

The grand plan was scrapped within weeks when it became clear that various would-be participants didn’t see eye to eye. The Lodi News-Sentinel wrote at the time:

The idea of a “million Muslim march” event in Lodi by Muslims to publicly denounce terrorism has officially died, say those involved.

Envisioned in late June as a response to the allegations of terrorists in Lodi’s Muslim community, the idea drew the interest of Mayor John Beckman, conservative radio host Mark Williams, the Sacramento chapter of the Council on American Islamic Relations and local Muslims.

Interest waned, however, when it became apparent the deep division in Lodi’s Muslim community would make organizing such an event difficult if not impossible. It appears it has become impossible, as Beckman said this week the event will not be happening.

“Deep division?” I’ve always wondered, over what? Over whether Allah approves of slamming kerosine-laden passenger jets into tall office buildings? Over whether the Prophet Muhammed would give his blessing to the savage butchery of Margaret Hassan, Daniel Pearl, Theo van Gogh, Kenneth Bigley, Steven Vincent, Nick Berg, and countless others? Over whether the Qu’ran permits blowing up carsful of subway passengers? I understand that different factions don’t always get along, but I didn’t think it’d be hard to draft a blanket condemnation of the grotesque violence, some statement that everybody who isn’t a terrorist sympathizer could easily get behind. But I could be wrong.

So… the Million Muslim March never happened (some weird upside-down facsimile of it did, last year; it drew about 25 participants).

Nor did a march with, say, a quarter of the original number: 250,000 American Muslims taking to the street in righteous anger and sorrow, carrying banners that say “Terrorist Slaughter Sickens Us” or simply, “Not in Allah’s Name”? Too much to hope for, I guess.

Again, I don’t doubt the excellent intentions of the 82 signatories in India, especially the Muslim ones, who are sticking their necks out for what they feel in their heart is right. Moderates do need to step up and condemn Muslim savagery.

Yet I keep drifting back to Sam Harris‘ harsh and uncomfortable words about “true” Islam. Harris claimed in a speech in 2010 that fundie gang leaders like Osama bin Laden, Mullah Omar, and Khalid Sheikh Mohammad don’t represent some off-the-wall, cult-like version of their faith. They are not the Islamic equivalent of the Reverend Jim Jones (that is, they’re not delusional madmen who have criminally perverted the central truths of an ostensibly Holy Book). Bin Laden, Harris said,

… gives a very plausible version of the faith. He gives a truly straightforward version of Islam, and you really have to be an acrobat to figure out how he’s distorting the faith. If these guys were Jains or Buddhists or Amish or Quakers, it would be patently obvious how they were distorting their religion. In fact, their behavior would be unintelligible. 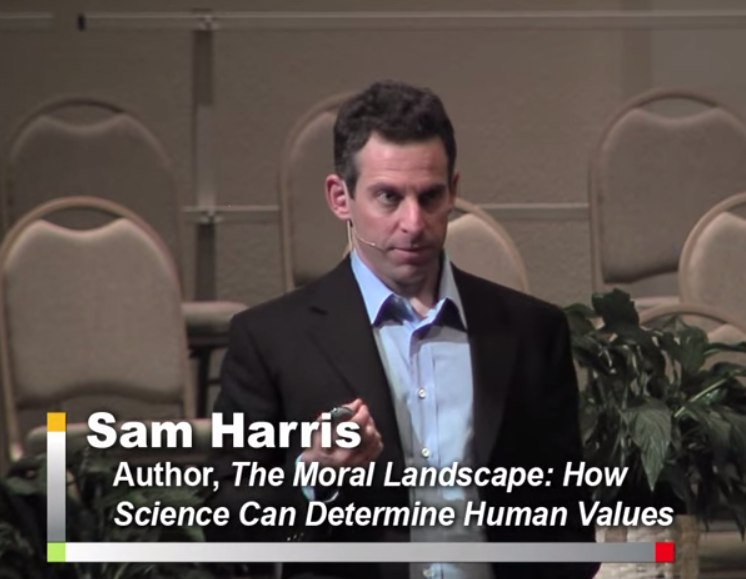 The only problem with Islamic fundamentalism, Harris concluded, are the fundamentals of Islam. If that’s true, 82 signatures are cause for worry, but not wonder.

August 20, 2014 Respectable Theory or "Pathologizing Belief"? Russian Scientists Posit That Microbes Spread Religiosity
Browse Our Archives
What Are Your Thoughts?leave a comment