As Expected, Right Wingers Are Rallying Around Student Who Supposedly Got Punished for Saying “Bless You” August 20, 2014 Hemant Mehta

As Expected, Right Wingers Are Rallying Around Student Who Supposedly Got Punished for Saying “Bless You”

Yesterday, I posted about Kendra Turner, a student at Dyer County High School in Tennessee, who claimed on Facebook that she was sent out of the classroom for saying “Bless You” after a student sneezed:

That seemed pretty crazy, and I offered this hypothetical:

The class was supposed to be quiet. Someone sneezed. Turner said *something* in response (it doesn’t matter what) and the teacher asked her to be quiet. Turner took that as a knock on her faith and felt the need to defend against it. The teacher only saw this as a further disruption and the situation escalated. The student, clearly frustrated, ran out of the classroom and, not long after that, posted something on Facebook.

As far as I can tell, that theory is still plausible.

Since yesterday, there have been a few updates.

1) The teacher supposedly had a list of things you couldn’t say in class written on the whiteboard, and “Bless you” was up there: 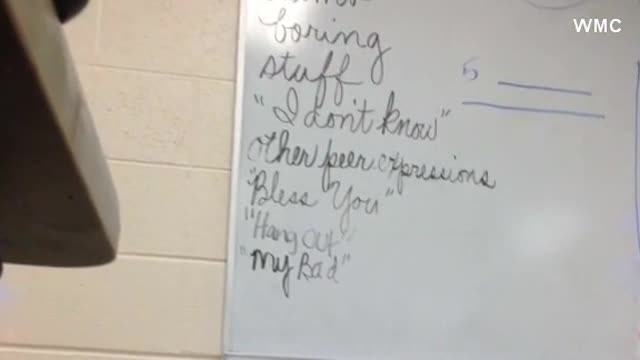 Still not evidence of an anti-Christian conspiracy. The teacher, who admittedly seems like a hard-ass, just didn’t want any distractions in class. In my several years of teaching, I experienced several instances where students were supposed to quietly take an exam, someone sneezed, someone else said “bless you” in a way that got everyone laughing, and the class took it as an opportunity to chat when that was the one thing they weren’t supposed to do. In my better moments, I found a gentle way to silence the class… but it’s not always easy to do. In this case, the teacher just put “bless you” on the list of things you shouldn’t say.

It’s just begging for out-of-context misinterpretation. But it’s not anti-Christian. If people regularly said “Gesundheit” the same way, that’d be on the board as well.

2) Bryan Fischer is already rallying his troops against the district. (Because why bother doing real research into the story?)

He notes that students were wearing handmade shirts with “Bless you” written on them yesterday and encouraged other students to join in.

3) Todd Starnes — you knew that was coming — also wrote an article in which he takes Turner’s side with no additional information whatsoever. Apparently her pastor is the only person to see the suspension slip. (The school said she wasn’t suspended.) Starnes also suggests administrators are working against her:

Every now and then a story will land on my desk that seems too outrageous to be true. And to be certain there are two very different versions of what happened in that classroom. But I’m prone to believe Kendra, too.

That’s because Tuesday, a school official tried to convince me this young lady was a trouble maker. They were clever with their words — but that was the impression I received.

Funny, I spoke with school officials yesterday, too, and they said nothing whatsoever disparaging of the student.

But if you want to believe Starnes’ interpretation of a conversation he won’t even reprint… well, you’re his ideal reader, willing to believe everything he writes without question.