If you think that atheism is simply the absence of a belief in gods, Robert P. George reckons he can teach you a thing or two. Literally.

George (below), a law professor who is professionally affiliated with Princeton, Harvard, and Stanford universities, just penned a piece for First Things, a publication that bills itself as “America’s Most Influential Journal of Religion and Public Life.” It’s a doozy. You see, George has discovered that there are actually three atheist creeds. 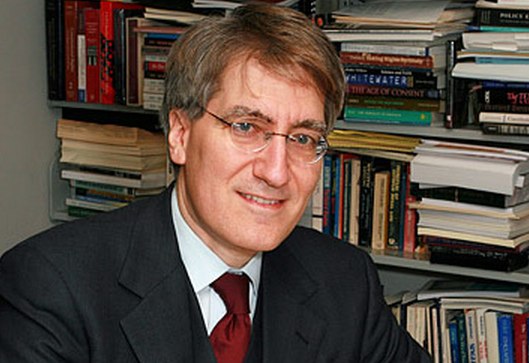 Plato’s first form of atheism is the denial of divinity itself — what we today usually mean by the term “atheism.” This is the idea that there is no God or are no gods.

The second form of “atheism” does not deny divinity. It supposes, however, that God or the gods do not concern themselves with human affairs. People today use the term “deism” as a label for this view.

George seems to understand he’s not exactly on friendly terms with reality here, considering that he uses quote marks around the word atheism. By definition, deists believe in a Creator. By definition, then, they are not atheists. For a man like George, who thinks of himself as a serious intellectual, this is linguistically shoddy stuff, as bizarre as calling a thunderclap the equivalent of silence. But he’s just getting started.

The third form of “atheism” accepts that there is a God…

What in the blazes? Again? Are you sure we’re talking about atheism here, professor?

… and that God is concerned with human beings. But this “God” is soft-spirited and easily placated or appeased. He makes no stringent moral demands of human beings. He wants us to like ourselves and like him. So it’s fine with him if we do pretty much as we please, whatever we please. He is an “I’m O.K., you’re O.K.” divinity — the perfect deity for an Age of Feeling.

Good news: If that particular god belief is really atheism, then atheists now form a majority in the United States! Rejoice!

All kidding aside, what George pulls here is just another variation of the No True Scotsman fallacy. As an abortion-fighting, gay-marriage-rejecting theocon, he is blithely playing the exclusionary card as though he invented it. If you don’t believe and worship exactly as Robert P. George and his buddies do, you’re obviously not a Real Christian™.

Just as annoyingly, his description of a nominally Christian God who is an “I’m O.K., you’re O.K.” deity is a straw man, or at least a haughty, sour misrepresentation. Most of the progressive Christians I know don’t live their lives “pretty much as they please, whatever they please,” with all the hedonism that that dismissive phrase implies — at all. While their religious precepts admittedly baffle me, I admire that they often move metaphorical mountains with the mandates that they derive from their faith.

Some of my Christian friends, on a yearly basis no less, build complete homes for families who have no roof over their heads. Just this past weekend, several states away, a group of them finished constructing a brand new kitchen in a shelter. Others are involved in anti-racism and other social-justice work, they parent foster kids, they get together to remove trash from public beaches, and so on.

(I imagine they’d still be good, caring people if they didn’t believe in God; and I know, as do they, that there’s no dearth of atheists who are likewise committed to making the world a better place.)

What led to George’s peculiar redefinition of atheism? Turns out he’s upset that Christian rock artist Vicky Beeching recently came out as a lesbian. Beeching told the Independent:

George can’t let that pass. There are rules, you know, Biblical ones that are much more important than Christ’s key command to love one another. And so:

The mortal threat to Christianity today … does not come from Plato’s first and second forms of atheism, but from the third. Few believers are likely to be led astray by the arguments or personal example of Richard Dawkins, for example. Dawkins, after all, presents arguments; he doesn’t simply appeal to emotion. And the defects of those arguments aren’t difficult to see.

Many believers, however, are being led, as Victoria Beeching has been led, into Plato’s third form of atheism — belief in an imaginary God made in the image and likeness of man, as man is conceived in the pseudo-religion of expressive individualism and me-generation liberalism.

That actually cheers me. If a singer who shrugs that she’s gay presents nothing less than “a mortal threat to Christianity,” it would seem that conservative Christianity is now a rickety, anemic belief system indeed; and I’d be ecstatic if many more happy Vicky Beechings will collectively pulverize George’s ossified faith until we can write our names in its white, ghostly dust.

August 20, 2014 In Response to Christian Protesters, Zoidberg Jesus Visits Comic-Con
Browse Our Archives
What Are Your Thoughts?leave a comment