This Comedian Has a Brilliant Proposal for the Westboro Baptist Church So They Don’t Picket Robin Williams’ Funeral August 19, 2014 Hemant Mehta

You may have heard by now that Westboro Baptist Church plans to protest at Robin Williams‘ funeral. (Because Jesus.)

Anyway, Australian comedian Adam Hills, who hosts the UK show The Last Leg, doesn’t want them to ruin the funeral so he made them a brilliant counteroffer: 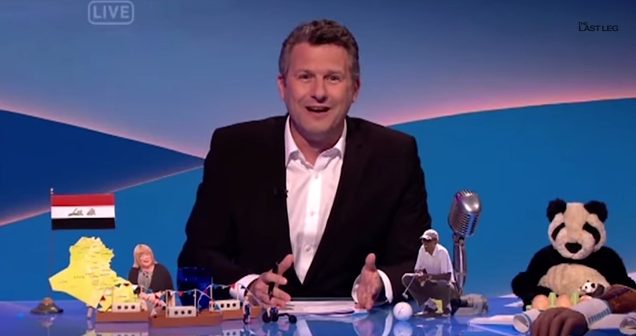 … If you really believe in standing up to those threatening the Christian way of life, Westboro Baptist Church, how about putting your money where your mouth is, taking a direct flight to Iraq, and picketing the people threatening to behead Christians if they don’t convert?!

Surely, that’s more of a threat to Christianity than the guy who said, “Do you think God ever gets stoned? Look at a platypus. I think he might!”

And I know there are members of the Westboro Baptist Church who’d say, “Well, the Iraqi Christians aren’t real Christians, because they’re not extreme enough!”

They are willing to have their heads chopped off rather than convert! That’s pretty freakin’ extreme!

I will personally pay for every member of the Westboro Baptist Church to fly to Iraq right now. I’ll even fly you first class and pay the carbon offset!

Because I reckon one of two things will happen. Either you’ll die while defending your beliefs and you’ll be carried away to Heaven in a gold chariot to sit at the right hand of God for all eternity. Or, if I’m right, and I’m willing to bet a dozen First Class flights that I am, God will be standing at the pearly gates alongside a 5’8″ hairy American comedian dressed as a middle-aged Scottish nanny saying, “Hellooooooo!”

And just when you think there’s a chance he might let you in, God will look back and go, “Hey, not only do I love ‘Fags’, but I fucking hate dicks.”

August 18, 2014
Friendly Atheist Podcast Episode 10: Dale McGowan, Author of In Faith and In Doubt
Next Post

August 19, 2014 Chinese "Evil-Spirit Killers" of the Church of the Almighty God Go on Trial This Thursday
"How many lawyers does this country even have? What percentage of them would be dealing ..."
Dmar3 As the Boy Scouts Go Through ..."
"Of course, Robert Baden-Powell's book entitled "Scouting for Boys" doesn't help matters."
Rick B As the Boy Scouts Go Through ..."
"Is it my age? Growing up in a Middle class American suburb? Never knew what ..."
Donrox Can a Middle School Principal Be ..."
"Sorry! A day late!"
Donrox Josh McDowell Says He’ll “Step Back” ..."
Browse Our Archives
What Are Your Thoughts?leave a comment