In the United States’ “Hardest Places to Live,” a Focus on Hell, the Antichrist, and the Rapture August 19, 2014 Terry Firma

In the United States’ “Hardest Places to Live,” a Focus on Hell, the Antichrist, and the Rapture

If you rate every county in the United States for factors like life expectancy, income, and education, you can eventually pinpoint the country’s toughest places — as well as the locales where life is, by and large, pretty damn good.

New York Times writer David Leonhardt did just that. Then, using Google data, he compared the Internet search terms in those two polar opposites — a proxy for what’s foremost on residents’ minds. “The [search terms offer] a glimpse into the id of our national inequality,” Leonhardt says, “a portrait of the very different subjects that occupy the thoughts of richer America and poorer America.” 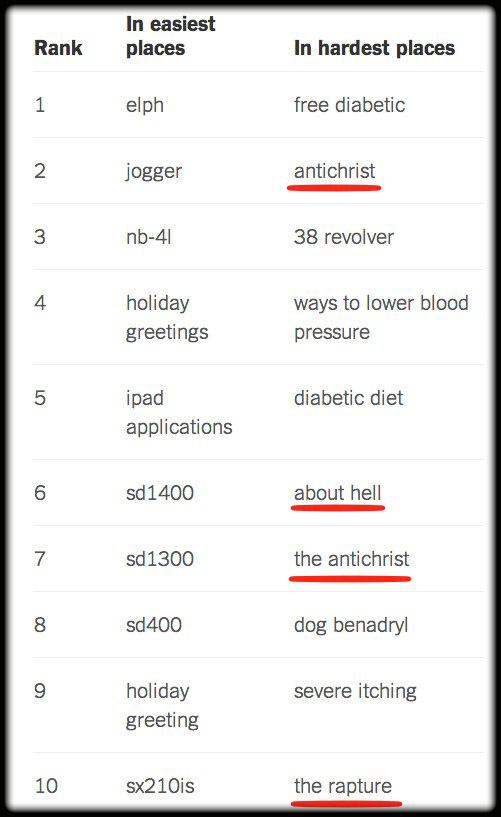 In the hardest places to live — which include large areas of Kentucky, Arkansas, Maine, New Mexico and Oregon — health problems, weight-loss diets, guns, video games and religion are all common search topics. The dark side of religion is of special interest: Antichrist has the second-highest correlation with the hardest places, and searches containing “hell” and “rapture” also make the top 10.

In the easiest places to live, the Canon Elph and other digital cameras dominate the top of the correlation list. Apparently, people in places where life seems good, including Nebraska, Iowa, Wyoming and much of the large metropolitan areas of the Northeast and West Coast, want to record their lives in images.

… religious web searches that are relatively more popular in places where life is harder have … a dark cast. “They are not just about religion but about apocalyptic religion,” notes Dan Silver, a cultural sociologist at the University of Toronto.

Leonhardt’s analysis doesn’t shed light on a question I find most intriguing: Does being on the bottom end of the socio-economic scale lead to an embrace of oppressive religious concepts like the Antichrist and hell? Or does believing in those things impede people from healthier attitudes that could empower them to find their way up the ladder?

In other words, is religion the salve or the illness?

(Graphic via The Times)

August 19, 2014
Frustrated Christian May Not Pick Up Roadside Trash Anymore Because Atheist Group Adopted That Stretch of Land
Next Post

August 19, 2014 Students Walk Out on Lecture About Memes When Religion is Used as an Example
Browse Our Archives
What Are Your Thoughts?leave a comment