Darrin Johnson is the director who created a brief but fascinating documentary earlier this year about black atheists and their portrayal in the media: 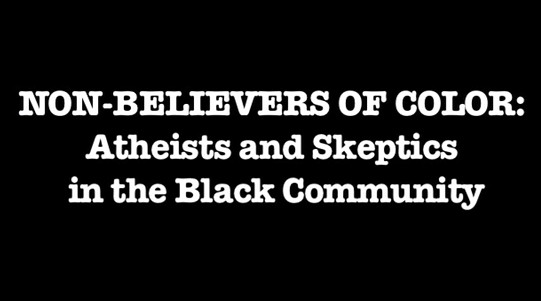 Today, writing for The Root, Johnson explains what he discovered during the making of that film and what he has known for a long while now:

… During its development, I found out that many people didn’t even know that there were black atheists. As a result, showing that nonreligious blacks do exist became a focal point for the project. Though the project was completed, I am now looking for funding to turn this project into a full-length documentary because I want more people to receive this message.

Unfortunately, American media and culture have made “coming out” as a nonbeliever difficult. We deal with fear of rejection by our friends and family, and have to grapple with the knowledge that we’re looked down upon…

Johnson also points out what I’ve heard all too many times before:

I am often told that being atheist is a “white” thing; as if not accepting any religion, including the one forced upon our ancestors, makes me care less about my community.

One way to change that is by amplifying the voices of African-American atheists when we have the opportunity, as Johnson is doing with his film. I’ve asked him for information on how we can all contribute to making it full-length and will update this post when I hear back.

August 18, 2014
Protesting Creationism by Riding Atop a Velociraptor Tricycle
Next Post