In 2012, during his stand-up special “Kattpacalypse,” comedian Katt Williams told his audience that they needed to grow up and stop believing in lies.

(The clip below, and just about everything that follows, is completely NSFW.) 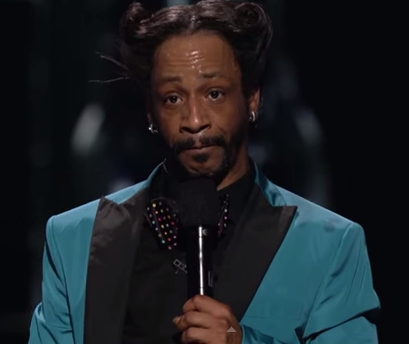 You too old to be believing in evolution… evolution say people came from monkeys, and the question is, why is there still monkeys, you dumb motherfucker, you…

Lovely… and obviously ignorant since the answer to that question are easily available to anyone who looks for it. But, okay, he’s just trying to be funny and the crowd seemed to enjoy it.

Last night, HBO premiered Williams’ latest special “Priceless” — it’ll be airing again tonight and multiple times over the next few weeks — and he spent several minutes ripping on atheists. I don’t have a clip I can post yet, but about halfway through the show, he talks about his belief in God and how “these atheists have gotten out of control.”

Because, he claims, they sent him death threats. (I’m assuming he’s referring to comments made in response to that last video about evolution, but I could be wrong.)

Listen here, Mr. Motherfucking Atheist, ain’t nobody goddamn scared of you, motherfucker, because you ain’t got no backup.

Okay. I get the joke. Moving on.

He also gripes about how atheists have the audacity to tell him what he believes — like if he believes in God, then he doesn’t believe in science or evolution! (Which, in his case, is actually pretty accurate…)

Then we get to this part:

Atheists [are] fucked up. Atheists hear my whole story, hear what I believe, and he gonna tell me, “Naw, that don’t make no fuckin’ sense. At all.” Okay! Then tell me your shit. His shit is that two motherfucking atoms just came the fuck together, came together out of nowhere, banged together, and made this whole perfect Earth. [Get the] fuck out of here. You stupid enough to believe that… shit, after this show, go outside to the parking lot and bang on your car till it becomes a better car.… [imitates banging] “Still a Corolla, still a Corolla. What the…”

And then a little later:

Atheists want you to believe two motherfucking atoms banged together, made this whole earth. That should mean they should be able to get on the space shuttle, fly around, and find a place where them same two atoms had banged together before and made some other perfect shit.

That’s not what they see. Every planet they see is more fucked up than the last planet… how you know it’s fucked up? Ain’t nobody on it!

So we can add the Big Bang theory to the growing list of scientific concepts Katt Williams doesn’t understand.

I know, I know, I’m dissecting a comedy bit and taking it *way* too seriously. You could also argue he’s just playing up the ignorance for laughs. But I’ve seen enough of his routines over the years to know that he’s not making these things up. He genuinely believes them.

What’s more disturbing is that his audience eats it up.

I should mention that Williams has a reputation for saying plenty of offensive things about pretty much every group of people — so atheists aren’t alone in that regard. It’s just strange to me that he would write entire bits about how science is wrong (and atheists are dumb enough to believe it)… when he very clearly doesn’t understand the science he’s talking about.

August 17, 2014 Canada's Fight Against Government Prayer Heads to the Supreme Court
Browse Our Archives
What Are Your Thoughts?leave a comment