In case you need another reminder that Jehovah’s Witnesses can be heartless, just look at the latest issue of The Watchtower: 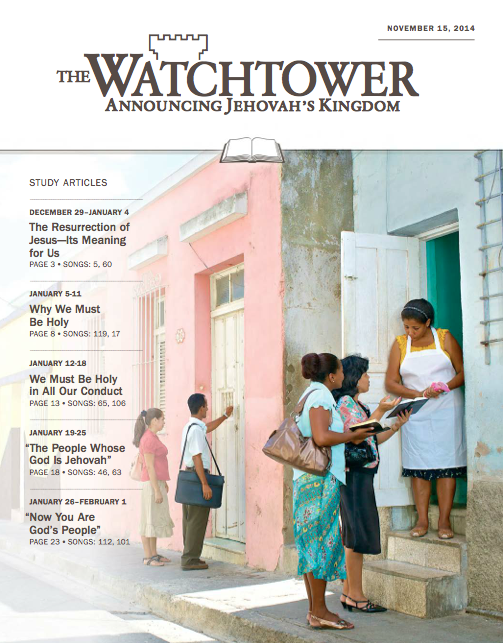 One of the articles brings up the story of Nadab and Abihu, the children of Aaron who disobeyed God and were killed because of it. In the Bible, the priests (including Aaron) are told not to mourn the sons’ deaths because that would be seen as a rebuke against God’s wishes.

Here’s what The Watchtower says about that story (p. 14):

A heartrending experience for Aaron’s family is recorded at Leviticus 10:1-11. They must have been devastated when fire from heaven consumed Aaron’s sons Nadab and Abihu at the tabernacle. What a test of faith it was for Aaron and his family not to mourn their dead relatives! Are you personally proving yourself holy with regard to not associating with family members or others who have been disfellowshipped?

Whoa, talk about a pivot!

Aaron was a great guy because he didn’t mourn the death of his disobedient kids! Are you, too, making God happy by refusing to talk to anyone who’s been excommunicated by the church?

In what should surely rank among some of the most grotesque propaganda ever to be churned out by Watchtower’s writing department, Jehovah’s Witnesses are being asked to think of their disfellowshipped family members, not just as being dead, but as having been killed by Jehovah. As such they are not to be mourned.

He adds that, to make that connection, you’d need some strong proof that God endorses your religion and no others… and JWs have no proof of that whatsoever.

There are certain faiths that rarely get called out on their practices, even by critics of religion, because they manage to stay under the radar. Outside of periodic blood transfusion issues, you don’t see too many Jehovah’s Witnesses in the news. But make no mistake: this idea of exclusivity among JWs, that they must shun those who are not in the faith or (even worse) those who have been kicked out of it, is incredibly pernicious. It damages families and ruins friendships. And it’s all done to appease a God that doesn’t even exist.

August 16, 2014
Brevard County (FL) Officials May Block Atheists from Giving an Invocation Since They're Not a "Faith-Based" Group
Next Post