Yesterday, on Fox & Friends (so you know this will end well), host Elisabeth Hasselbeck ranted about how atheist groups are removing the Bible from Navy hotels and warning a Georgia school district against football coaches who impose Christianity onto their players.

She went on to say that, since Christians are legitimately being persecuted in Iraq, we should stop paying attention to the pesky First Amendment: 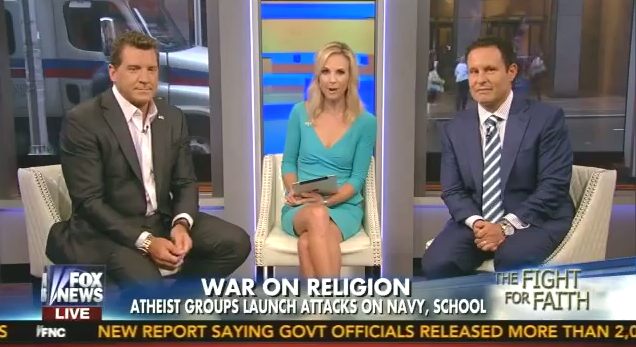 Eric Bolling: I don’t know how having a Bible in a hotel room in a drawer is forced on anyone. You don’t want to read it, leave it in the drawer. You’re not forced to read it. How is that implicating the Navy in any way, shape, or form? I can’t figure that one out.

Brian Kilmeade: But you would think that a… federally run organization would be able to make their own decisions. But it’s atheist organizations that are pushing back on that.

Bolling: And if it’s a money thing, I bet my bottom buck you can find someone who’s willing to donate all the bibles for all the rooms in the Navy and in the high school. [Hemant’s note: It’s not a money thing. Gideons International provided the bibles free of charge. Also, public high schools don’t need bibles.]

Hasselbeck: You know, in light of what’s going on in the world and the persecution of Christians right now, how close… do we want to get to eliminating religious freedom in the globe? Particularly here.

Bolling: And I carry the Constitution every single day. This is a big big point of contention. I’m a Constitutionalist. And these “freedom from religion” groups, I don’t think they have a basis in this. I really don’t. I think they’re expanding, they’re overstepping the bounds on it.

Kilmeade: They’re passionate in what they don’t believe.

It’s amazing how Bolling can carry a pocket Constitution in his pocket, yet never get past the First Amendment…

More importantly, all the letters sent by the Freedom From Religion Foundation or American Humanist Association are jam-packed with precedents — cases where the courts ruled on their side of the issue. They’re not overstepping anything. The courts have sided with them time and time again.

And no one’s taking away the Bible! It’s still available in the Navy hotels and visitors can always bring their own copies. The football players can still pray all they want. The only problem is when the government is promoting Christianity by giving everyone a Bible in the hotel room and public school coaches are coercing their players into participating in team prayers.

Hassebeck’s comment, though, is the most appalling, because she’s suggesting we ignore our own Constitution because of what Christians are facing overseas, neglecting the fact that people of all faiths are protected here precisely because of it.

That didn’t even register for Bolling, who was probably too busy thinking about his precious pocket Constitution to offer a rebuttal.

Oh, who am I kidding. He wasn’t thinking, period.

August 14, 2014 Responding to "The Three Mistakes Atheists Make"
Browse Our Archives
What Are Your Thoughts?leave a comment