Kevin Sorbo is the former Hercules star who appeared in the money-making, nasty-stereotype-affirming, faith-based movie God’s Not Dead.

The movie’s out on DVD now and Sorbo appeared on Access Hollywood yesterday to discuss the film with co-hosts Kit Hoover and Shaun Robinson: 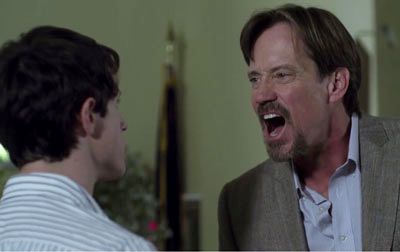 After a brief conversation about Robin Williams, they moved on to discuss Sorbo’s faith (he’s a Christian who played an atheist professor in the movie). And then it came time to bash all the atheists. (***Update***: The video is no longer online)

Sorbo: … I’ve seen these guys [atheists] on TV and cable outlets… Atheists actually have, like, chapters and they have, I mean, it’s weird. I see the anger when these guys get on TV! And I’m going, wow, how do you get so angry about something you don’t believe in?

Sorbo: I find that very interesting.

Robinson: Every time I’m around, if I’m ever around an atheist, I think I’m gonna get hit by lightning or something. I just don’t even want to be in the room with them.

Sorbo: It’s weird how they can get nativity scenes pulled down because they say it offends them. They’re offended by something they don’t believe in. Well, it offends about 90% of people of the country that they take the nativity scenes down, but apparently, the majority doesn’t have a voice in this country anymore, so what are you gonna do?

Sorbo: What’s interesting, people can say, oh, that doesn’t happen, where students get persecuted at universities because of their belief. It does happen. At the end of the movie, we show 37 court cases — we could’ve shown many more — in the closing credits of major universities being sued by students because they’re being persecuted purely for having a faith in God. What’s the big deal? I mean, live and let live. I’m a live and let live kind of guy. If [you’re] an atheist, fine. If you’re an Agnostic, we can talk…

Robinson: God is telling us now we have to go to a commercial…

I know these are old talking points by now, but the reason atheists get “angry” about nativity scenes is because they’re perfect examples of the government promoting Christianity when it should be neutral on religious issues.

And those 37 court cases of Christians being persecuted for their faith? One professor referred to them as typical “Christian-email-forward boogeymen.” If they were actually being persecuted at a college “purely for having a faith in God,” atheists would be at the front of the line trying to defend them.

Even though the host said she wouldn’t want to be in a room with an atheist, it didn’t actually offend me. I’d just chalk it up to ignorance and her not knowing anyone who’s openly atheist. So let me preemptively stop people from arguing she never would’ve said that about Jews. Sorbo, on the other hand, should have known better.

Yes, this is just vapid banter with a celebrity, but it’s disturbing how easy it was for Sorbo to trash atheists the moment he had an opening. Even for an Access Hollywood interview, it’s pretty awful. And it’s clear that the one-dimensional stereotypes the movie became known for portraying are still in full effect.

(Thanks to Christiaan for the link)

August 13, 2014
A Conservative Christian Group is Now Begging the IRS to Come After Politicking Churches So They Can Fight Back
Next Post