Alexander Aan, you may recall, is the Indonesian atheist who spent 19 months in jail for promoting atheism online (his original sentence was 30 months). He was hit with a blasphemy charge and put away so he could do no further “damage.” 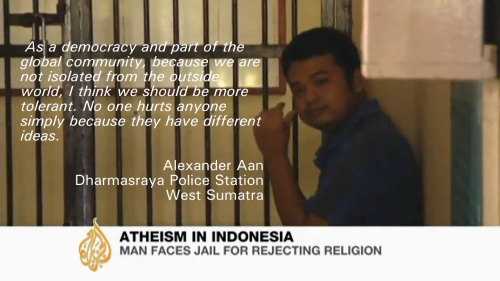 Even though he’s out of prison now, the Jakarta Post reports that, yesterday, the Indonesian Supreme Court deemed his sentence appropriate:

The court said it upheld the sentence for former civil servant Alexander Aan, who was found guilty of disseminated a cartoon portraying the Prophet Muhammad and saying on Facebook that “God does not exist.”

“The defendant is proven to have spread information which blasphemes the Prophet Muhammad in eleven cartoons,” the court said in its ruling.

Alexander, who worked as a civil servant at a local government office in West Sumatra, was beaten by a mob before taken to jail after he posted the status and cartoons.

The Indonesian state requires every citizen to believe in God.

It goes without saying that Aan’s “crime” was victimless. For the country’s Supreme Court to uphold that sentence (even after it’s been served) is embarrassing, disappointing, and a sign that they haven’t learned a damn thing since Aan’s imprisonment.