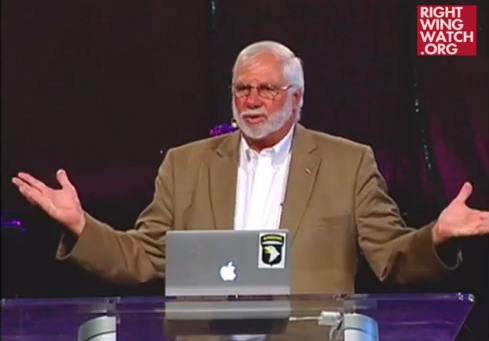 … There’s a development within species, but we do not have a single example anywhere, in all of history, of species change. Not one!… You can mix a donkey and a horse and get a mule, but mules cannot reproduce. They can only reproduce after their own kind. We have no species change.

Why would a whole theory, everything taught in our schools, be based on something that is so outrageously not only ridiculous, it’s impossible?

Not one example? How about… all of them? We all have ancient ancestors who’d be considered different species from us. Want them within one human generation? Experiments have shown it happening. Want more evidence? There’s fossils and DNA… but those never seem to matter to Creationists.

Evolution takes time. You’re not going to see humans evolve into another species over the course of your lifetime. It’s a relatively slow process that only takes shape when you consider the long arc of natural history.

(By the way, it’s rare, but mules have given birth before.)

I’m not surprised by any of this. And Joyner, of course, fails to see the irony of lamenting the teaching of impossible theories that have no basis in evidence… while worshiping a guy who performed anecdotal miracles and was born of a virgin mother.

August 8, 2014
63 Texas Republicans Put It In Writing: Marriage Equality "Could Lead to the Recognition of" Pedophilia & Incest
Next Post

August 9, 2014 Should an Atheist Eagle Scout Feel Bad if He Had to Lie to Get the Honor?
Browse Our Archives
What Are Your Thoughts?leave a comment