Last year, I posted about a book called the Awkward Moments (Not Found In Your Average) Children’s Bible documenting many of the Bible’s little-known verses.

The book was written by “Horus Gilgamesh” and illustrator “Agnes Tickheathen” (Agnostic Heathen) — both obviously pseudonyms. It received incredible reception online, becoming a mainstay atop Amazon’s books about atheism.

And now, despite the attempt at anonymity, their identities have been discovered by a Christian who just sent them a death threat: 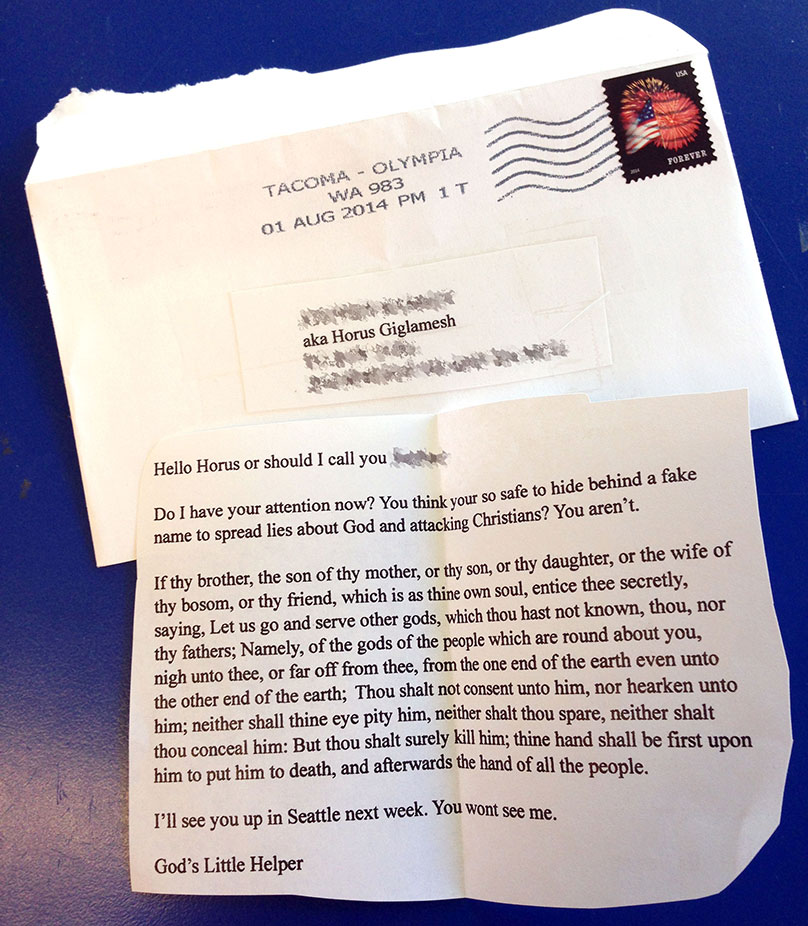 Why Seattle? The authors will be there for the Atheist Alliance of America’s annual convention.

I write under a pen name, I separate my writing from my personal life as much as possible, in order to maintain family privacy while protecting my other businesses from the unknown. You feel pretty safe until you open your personal mailbox to find an odd letter addressed to your private name — no return address, just a postmark from a couple of hours away.

A lot of things go through your mind while standing in the middle of the road, reading a letter like this: How did they get this address? How did they find my real name? What is this verse? Who are they? What do they want? This is obviously the King James? Are they serious? Would someone actually track me down at a speaking engagement to cause me harm? Where’s my wife? Where’s my gun?

Honestly, my first reaction was, “Holy crap! How have we never illustrated this little bit of madness before?” My second reaction was, “I stand corrected — some Christians apparently do read their Bibles.”

Gilgamesh went to the police, but they understandably couldn’t do much without more information.

He told me over email he’s not letting this threat deter him:

In the midst of fear and a sense of helplessness, I have been absolutely amazed and humbled by the support and encouragement I have received after sharing this story. Within minutes, I received countless messages offering everything from personal protection by off-duty military officers to safe beds for my family. The onslaught of selfless generosity simply overwhelmed me.

At the end of the day, I came out publicly with this situation because I won’t be silenced. Whether or not I ultimately choose to present at the conference in Seattle is actually irrelevant — I will continue doing the work I do on a daily basis. God’s Little Helper has already lost — showing an ugly side of his or her religion — that almost any dirty deed can be justified by the Good Book. This, of course, is not my problem to solve — but that of everyday Christians who would be quick to denounce this pathetic bully. But, would they be right to do so? Is he not following scripture — the laws of Moses? Sure, many Christians will claim that this person isn’t a “real Christian” or that, “the laws of the Old Testament no longer apply because Jesus came and…”. Of course, they conveniently forget Christ’s own words on the matter from Matthew 5:18-19 and Luke 16:17. Again, their problem — not mine.

I spoke with AAA’s President Chuck VonDerAhe over the phone yesterday and he told me authorities have already been notified and everyone attending the conference should feel very safe.

(Thanks to Adrian for the link)

August 7, 2014
These Are Pretty Bad Reasons for the Catholic Church Not to Sell Some of Its Assets
Next Post