This North Carolina Diner Gives a 15% Discount to Customers Who Pray Before a Meal August 1, 2014 Hemant Mehta

When Jordan Smith visited Mary’s Gourmet Diner in Winston-Salem, North Carolina, she made sure to pray before her meal as she always did. Nothing special there. But when the waitress brought her the receipt, there was a surprise on it: a 15% prayer discount: 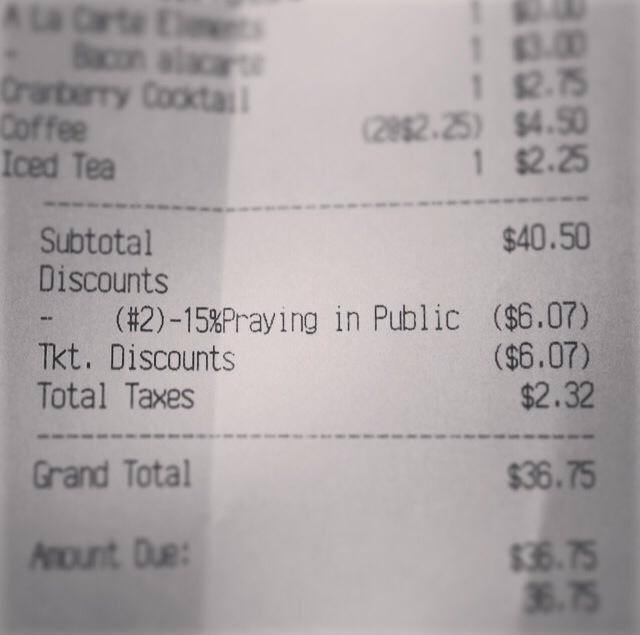 Some people wondered if it was just another social media hoax, but Shama Blalock, a co-owner of the diner, confirmed to NPR that “It’s for real, it does exist.”

Blalock says it’s something that she was moved to implement about three and a half years ago. “We’re very thankful for the attention we’ve received, but that’s not what we were aiming at,” she says.

Blalock says the discount is given to customers at the discretion of the wait staff.

The owners say that the discount is available to non-Christians, too, but usually Christians are the only ones who want to pray in public for everyone to see. Just like the Bible tells them to.

In response to the reaction, one of the owners posted this on the diner’s Facebook page this afternoon:

There’s a lot of craziness going on in regard to the 15% discount. I will not respond to all the posts. I will say that it is not a “policy”, it’s a gift we give at random to customers who take a moment before their meal. This could be prayer or just a moment to breathe & push the busyness of the world away. Who you talk to or meditate on etc. is your business. I have lived in a 3rd world country, there are people starving. We live in a country with an abundance of beautiful food. I NEVER take that for granted. It warms my heart to see people with an attitude of gratitude. Prayer, meditation or just breathing while being grateful opens the heart chakra. It’s good for everyone!!!! Thanks to my local community for your support…you know who I am. As for all the people posting negative comments about me & my restaurant who have never met me or been to the restaurant, thanks for sharing, it’s your right to speak out, just as it is mine. Peace, love & happy eating!!!!

The big question is: Is this illegal?

There are laws against religious discrimination in public places, but the owners are trying to get around that by saying the discount is available to everyone who prays.

But that’s not good enough.

We’ve seen this sort of thing before, with restaurants giving discounts to people who bring in church bulletins. To avoid lawsuits, they usually just have to give the same discount to anyone who brings in, say, a document from a local atheist Meetup group.

(At least they’re not as bad as the pizza place that gave you a $2.00 discount for saying “Jesus died for me.”)

So if people want to test the unstated policy at Mary’s Gourmet Diner, I suppose they’d just have to take a moment to stare into space silently before a meal and then request the discount. I’m not saying it’s an automatic legal victory, but this sort of Christian-privilege discount is just asking for trouble, even if the owners say it’s not just benefitting Christians.

By the way, if you do decide to test it, I suggest ordering $44.40 worth of food first.

August 1, 2014
Even Though the IRS Will Now Investigate Politicking Churches, a Christian Group is Claiming Victory Over FFRF
Next Post