Christian Pseudohistorian David Barton recently spoke to the Romeo Area Tea Party (in Michigan) and explained how it’s almost impossible to find an atheist farmer because they’re around “God’s Creation” every day (42:45 mark): 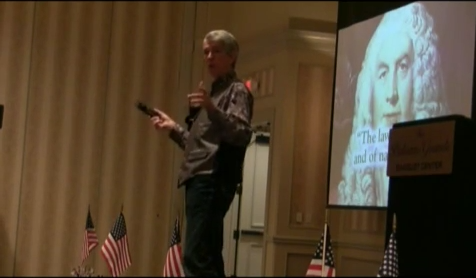 … Paul said that everything that can be known about God… including the intricacies of the Godhead, have been revealed through what He has created… Now Paul says everything you can possibly know about God, you can get by studying Creation. The problem we have today is we don’t study Creation. We don’t understand how it works. We don’t know a lot about it. It’s an interesting thing: folks who grew up on farming and ranching [communities] know a lot more about Creation than folks in the city, which is why it’s almost impossible to find an atheist among farmers and ranchers, and it’s very easy to find among people who work in skyscrapers their whole life. If you’re in urban areas, it’s a whole lot easier to not believe in God than people who get out and have their hands in the middle of it.

That’s quite the reach. Barton thinks when you’re around the natural Earth, you’re more likely to believe in his God. By that logic, you’d think people who study living organisms (biologists), or the properties of those organisms (chemists), or the stars (astronomers) would also be able to see evidence of “God’s Creation”… but we know those fields are full of atheists.

Here’s an alternative theory: When you’re more isolated, as farmers tend to be, you’re much less likely to encounter people whose different ideas may challenge you. That’s not true in the city where, for example, it’s a lot harder to be anti-gay because you’ll inevitably meet and know gay people and realize there’s nothing to worry about. People who work in skyscrapers likely work with other people with different beliefs and their thinking is tested regularly.

There’s no reason to think farmers are more likely to be religious just because they’re around “God’s Creation” all day. That’s evidence of evolution as much as anything else. Barton never explains where he’s getting this information from, anyway, probably because, like so many of his other claims, he just pulled it out of his ass.

August 1, 2014
Please Support the Work I Do Through This Site
Next Post

August 2, 2014 The Decline of Religion in America as Seen Through a Handful of Graphs
Browse Our Archives
What Are Your Thoughts?leave a comment