A Christian Response to Fifty Shades of Grey: Reviewing Pulling Back the Shades by Dannah Gresh & Dr. Juli Slattery

The trailer for Fifty Shades of Grey is out, and at my day job as a bookseller (all opinions are mine, not my employer’s, etc), I’ve seen more copies of that book go across the checkout desks this past week than I’d like to admit. It’s having a surge in popularity and people are eagerly anticipating the Valentine’s Day 2015 release of the film. 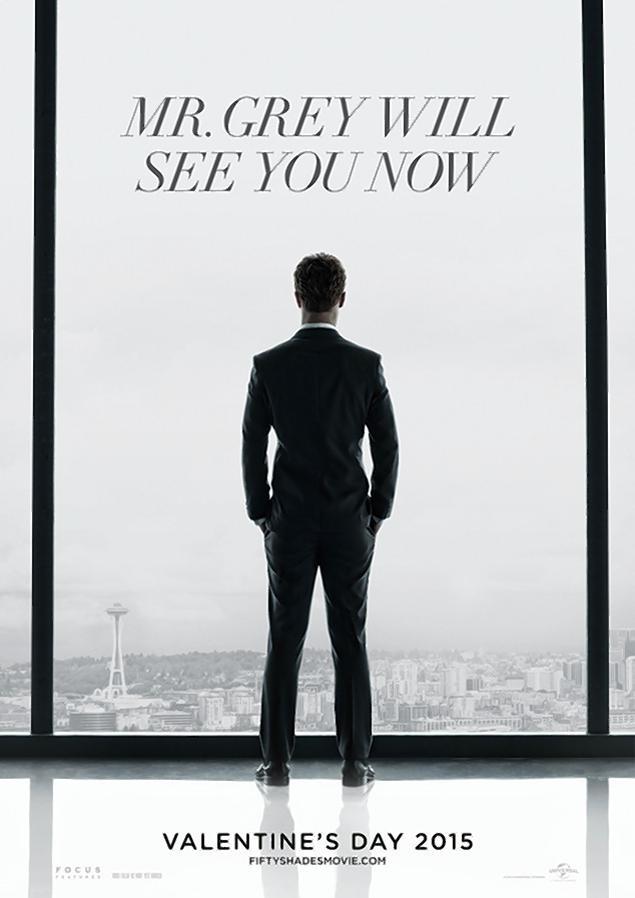 But there are better places to go for reviews of the controversial series. I’m here to review a book that takes on the idea of erotica from a mainstream evangelical Christian perspective. 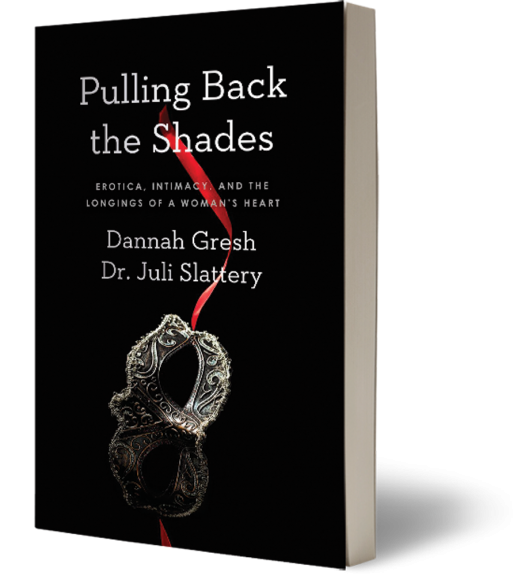 I’ve tussled with Gresh on purity culture before, and I generally dislike her approach, though she and I have talked and I think she’s warm and personable and a good listener in person. But she happens to be of that stripe of evangelical Christian who seeks to empower women by making them aware of the male gaze to push them to live according to the terms of complementarian gender roles. In this philosophy of gender, women are to own their wholeness as human beings by being sexual only inside of a cis-normative, gender binary, Christian marriage. Complementarian women are encouraged to leave their sexual power at home, in the bedroom, and not to pose a threat to the patriarchal structure of engaging socially only as supporters, nurturers, and encouragers, rather than as thinkers, leaders, innovators, and creators.

I’m less familiar with Dr. Slattery, but she presumably keeps ideological company with the complementarians as well.

The premise of their book is simple: Evangelical Christians believe that all areas of life can and should be subject to ethical scrutiny on the basis of whether or not a thing is biblical or godly, and the advent of Fifty Shades of Grey has brought the national awareness of erotica to a peak that has provoked these Christian purity teachers to give their response.

The problem is, one of them hasn’t even read the book series — Gresh admits this up front. Slattery has read the books, but their response is unanimous: they condemn the series and erotica in general as bad for Christian women.

However, they still want to encourage Christian women in (what they deem to be) healthy sexual expression, so they spend the rest of the 171-page book trying to explain, without much detail, how this can be done.

This book fails to do what it should, which puts it on par with every other Christian book I’ve ever read that focuses on relationships or sexuality. The intended message of “You are sexual and that’s good! And beautiful! And part of God’s plan for you! Enjoy it well!” gets utterly and completely drowned out in a downpour of repression- and shame-driven caveats and conditions.

I have so many problems with the culture of shame created by the Western evangelical church around the human body, and this is one of the biggest places where it’s evident. Gresh and Slattery desperately want to encourage healthy sexual freedom, but they don’t seem to know what it is well enough to articulate it.

The first and biggest problem with this book is the fact that they never, ever discuss the concept of consent — an idea that is the basis of all ethical sexual expression and one that should be taught in the church (and never or rarely is). As far as I can deduce, consent is understood by them to be a constant state, conferred on the partners by the condition of marriage. This leaves the door wide open for pretending that marital rape doesn’t ever occur — an issue that should be addressed swiftly, especially since they’re supposedly responding to and critiquing what they see as deviant sexual behavior. But consent and rape are never mentioned, except in one case, in a testimony of a woman was raped by her guardian when she was a minor.

They also don’t seem to know what exactly erotica is. Slattery defines erotica as “[fiction that] uses fantasy ultimately to promote deception — to make you believe you can have everything you’ve ever longed for.” They then proceed to illustrate this point by listing all the irrational or impossible things that occur to Anastasia during the course of the Fifty Shades series. This makes zero sense. Erotica isn’t an exercise in impossibility for the sake of self-deception and escape (though the worst of the genre sometimes tries to do only this); erotica, at its core, is designed to entertain and arouse, ideally in a way that allows the reader to explore his or her sexual desires without acting on them. It’s the safest form of sexual self-exploration.

All throughout the book there are little snippets of stories told to the authors by women in the church, and most of them express that a) erotica is addictive, and b) addiction to erotica ruined the life of the storyteller.

One such testimony opens:

“I am single and erotica has ruined my life. I have been addicted for ten years and I am only twenty-five.”

“I believe this genre of literature… are very spiritual books with an aggressive spiritual agenda… These books take you on a journey that has a spiritual impact and an intended spiritual destination: destruction.“

This. This is why the book fails later on when the authors try to encourage healthy sexual expression for their readers. They premise their whole approach on the assumption that anything not firmly grounded in reality and tied to the keeping of the marriage vows is something that Satan is going to use to destroy you. Beyond the whole silly use of the slippery slope fallacy here, this approach is centered on fear of unrepressed female sexuality. A woman fully alive to her own body and sexual needs and desires is something they believe to be inherently dangerous. That’s why dancing along the edge of it is hazardous; you’re inevitably going to fall in and be unreachably far into dirtiness and sin.

Pursuing sexual awareness for a woman, they say, is creating an “emotional land mine in the bedroom” — which is to say, to have a woman be anything other than utterly dependent on her husband for arousal and appreciation of her sexuality is setting herself up for the end of her marriage. In other words, don’t even think about appreciating or enjoying sex apart from your husband since good complementarian women aren’t supposed to be sexual unless he’s right there beside you.

This brings me to a pervasive problem in Christian relationship books aimed at women: the assumption that female sexuality begins with the initiation of a woman into the world of male sexuality. This can be through abuse, rape, regretful premarital sex, or happy married sex, but it always starts and ends with a penis. This gets taken to such an extreme that even masturbation is condemned if it uses any sort of imagination or fantasy to speed things along — that would be making oneself dependent on a man other than your husband, even if he’s fictional. Which would be cheating, and a misuse of sex (by their definition of the act).

Gresh is known for her interpretation of the Hebrew references to sex in the Old Testament (yada, according to her) as “to know, to be deeply respected,” and she explains that this is a sign of how sex was intended by God for marriage, where you can have that sort of intimate knowledge of your partner. She further asserts that sex always transcends the physical act, which is how she explains that cheating is wrong (again: no mention of consent here) and why she believes that no-strings-attached sexual encounters are also wrong.

She concludes this little explanation by saying:

“Erotica places undue emphasis on the physical and disables your ability to connect emotionally.”

I find this hard to believe, seeing as erotica is entirely based on the imaginative capabilities of a sexual human being to use fantasy for arousal, and doesn’t require anything physical at all. The focus in the fantasy, I agree, is physical rather than emotional, but can’t it also follow that heightened sexual awareness can help improve intimacy in the bedroom and increase emotional connection during sex? I suspect that Slattery and Gresh both have trouble connecting their own experiences of moments where they owned their sexuality to themselves as whole human beings in positive ways. The over-emphasis on the spiritual and intellectual understandings of sexuality leave the physical out in the cold in a very Gnostic, dualistic sort of way.

Gresh brings this split out further in a later chapter, where she tells a story from her marriage where she considered herself to be owning her sexuality in her marriage in a positive way: one evening, she wore a somewhat sheer black top to the dinner table on a night when she and her husband were dining alone by candlelight. He checked her out across the table, and she congratulated herself and felt empowered. Essentially, she was exploring her ability to perform for her small audience’s male gaze and felt good about her success in catching his eye.

But again, this is about him and his arousal and her sexuality is entirely defined in reaction to or performing for his sexuality. He is the fixed point and she orbits him. It’s as if she has no sexuality outside of him, and while she is quite articulate about how women should not be ashamed of their bodies when they are with their husbands, she shows little capability of being aware of herself as a sexual being independent of her sexual relationship with her husband.

This is not a critique of Gresh or Slattery as individuals. Their stories happen to be very common, compared with the many I have heard and witnessed in my years in the church. Evangelical American Christians don’t have a framework for female sexuality that doesn’t start and stop with a husband’s penis. And I think this is ultimately why erotica is seen as a threat: it’s a primarily female-focused genre, and it explores female sexual pleasure in ways that are infrequently seen in our society. A good erotic fiction piece is a sexual outlet for a woman that requires no permission, no help, and no penis.

If this is all the church has to offer on healthy expression and exploration of female sexuality, no wonder they’re so worried that Christian women will be running out to buy Fifty Shades of Grey. I wouldn’t blame them, though I might recommend they try reading Anais Nin instead.