Have you been watching CNN’s Crossfire lately?

S.E. Cupp, the atheist who “would like to be a person of faith,” is one of the co-hosts and, in a rant posted on CNN yesterday, she argues that conservatism is better suited for atheists than liberalism. 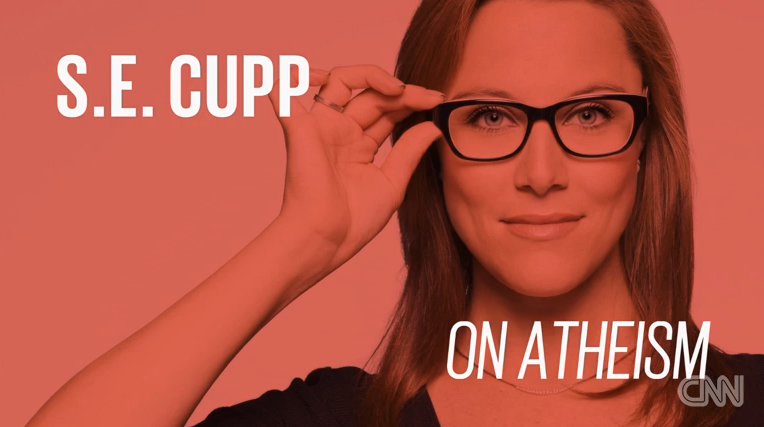 I know the video is purely designed to provoke a response from the left… but I’ll bite. Let’s go through the 95-second rant, word by word.

That pretty much sets the tone for the whole video…

I don’t believe in God, but I’m not mad at Him. I became an atheist because I’m not a joiner. I didn’t want to be part of a club or a group.

This is the only sensible part of the video. Enjoy it. It doesn’t last long.

It seems like there’s this idea perpetuated by atheists that atheists are somehow disenfranchised or left out of the political process. And I just don’t find that to be the case. 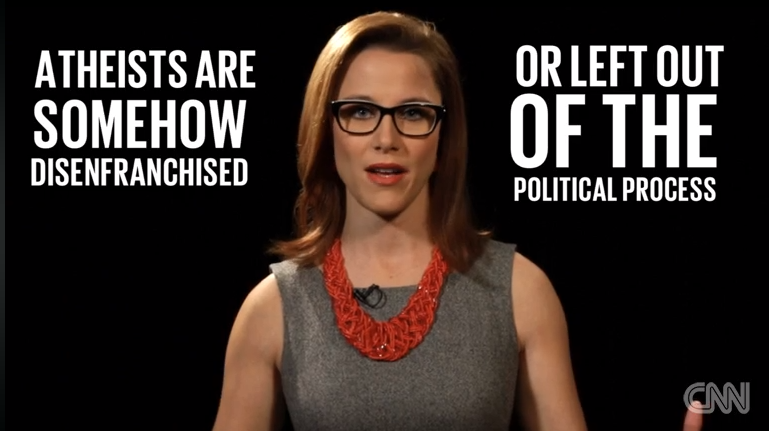 There’s a difference between being victims of illegal disenfranchisement (as some minority groups arguably are) and just plain being ignored. We’re ignored. Politicians don’t pander to us as they do evangelical Christians. They’re not courting the endorsements of atheist organizations. They don’t make any promises specifically to us about how they’re going to vote when they get elected. And I don’t necessarily blame them. Atheists don’t vote in lockstep and we don’t have the numbers to make pandering worthwhile. Reaching out to us would probably hurt candidates a lot more than it would help. (That said, there are minority groups much smaller than atheists that get plenty of attention from candidates.)

So, yes, we are left out of the political process. But that’s not entirely the fault of our government. If we could deliver votes like church leaders can, they’d start paying attention to us. It’s as simple as that.

Let’s also not forget the stigma that you can’t be openly atheist if you want to win an election. Despite the handful of states that still have unenforceable laws in the books preventing atheists from holding political office, there’s nothing preventing us from running as candidates. But atheism is still a liability for candidates. Remember: Former Rep. Pete Stark is the only person in modern history who has served in Congress while admitting to not believing in a higher power — and he came out as a non-theist decades after being elected the first time.

Again: Are we left out of the political process? Yes. But there are practical reasons for that. The point is: I don’t hear atheists complaining that the Man is keeping us down or that there’s a conspiracy against us, and that’s what Cupp’s comment sounds like to me.

I think, in fact, atheists have grown more vocal over the past decade or two than ever before. In fact, in many ways, atheists act like a religious body unto themselves.

Sure, we’ve grown more vocal, but how the hell are we like a religious body? It’s not like we have a leader. (Just look at the backlash by many atheists against Richard Dawkins‘ recent tweets for evidence of that.) There may be church-like “congregations” in some places, but we’re only talking about a fraction of a percent of all atheists in America that participate in such groups.

Cupp doesn’t elaborate on how we’re “religious.” She just sees other atheists as a monolith — and never bothers to back it up.

There’s another myth that conservatism is somehow hostile to atheism. I also don’t find that to be the case. I’m a conservative atheist; I’ve felt very welcomed by this party. 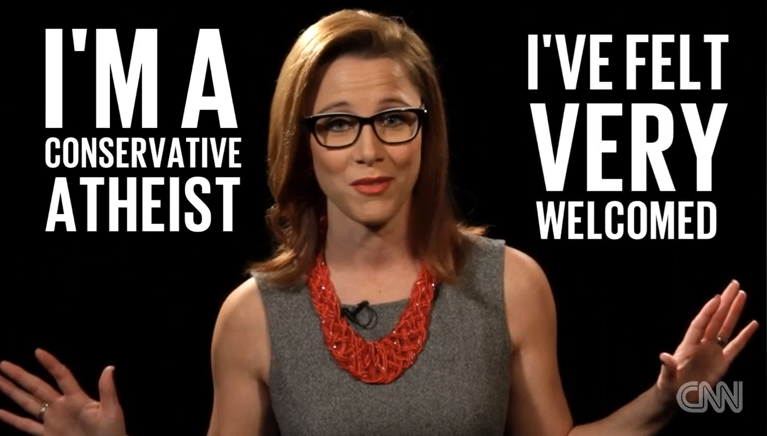 Notice she never says the word “Republican.” Because they absolutely don’t want atheists in their party. They don’t even want moderate Christians in their party. So what “party” is she talking about? Academic small-c conservatism? Maybe, but that’s not the group that’s in power within the GOP.

Cupp also never elaborates on how exactly she’s a conservative. On which issues does she depart from liberals?

Is it possible she’s welcomed by the “party” in the same way Supreme Court Justice Clarence Thomas is? That is to say, her views as an atheist are completely out of sync with the majority of atheists just like Thomas’ views are not shared by most African Americans. I’m sure conservatives love atheists who don’t seem to give a damn about their atheism or the political implications of it.

In fact, I’d go so far as to say conservatism is far more intellectually honest and respectful of atheism than liberalism has been. For conservatives, atheism is something that is tolerated, respected, we appreciate an intellectual diversity. Most conservative atheists I know, including myself, have a really healthy respect for the role of religion in society and in this country in particular. 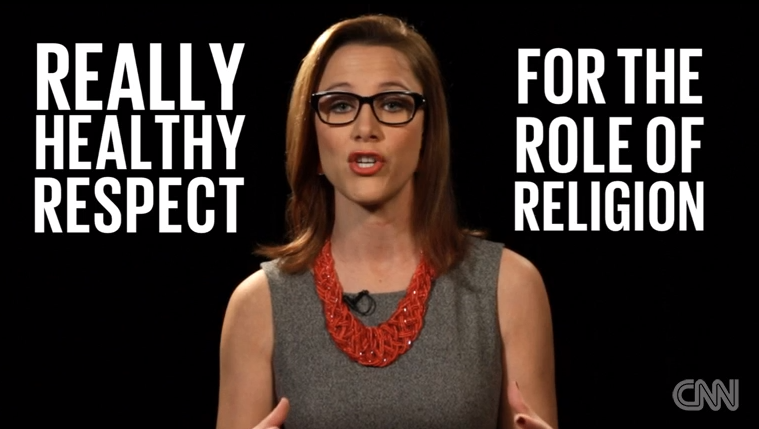 Gotta love that intellectual diversity within the GOP right now. It ranges from Sarah Palin to Ted Cruz.

Look, most atheists I know have no problem accepting that other people are religious — we “tolerate” them, too. What we want is for the government to treat us all equally and not to privilege religious beliefs over non-religious beliefs. Cupp, on the other hand, respects the role of religion so much that she thinks the Presidency ought to remain in the hands of the faithful because she doesn’t think “that someone who represents 5 to 10 percent of the population should be representing and thinking that everyone else in the world is crazy, but me.” (Thinking everyone else is Hellbound? Perfectly fine, I guess.)

Cupp also never explains what the role of religion ought to be. Over which issues should religion play a key role? Science education? Access to birth control? Comprehensive sex education in public schools? Marriage equality? Programs that help the poor?

You won’t get any specifics from her.

And in contrast, on the left, it seems as though there is this knee-jerk embrace of what is more like a militant hostility, a reaction against intellectual diversity. It’s exclusionary.

How is the left “militant”? Is that position any different from those on the right? Who are we excluding?

Again, no specifics. Just a lot of buzzwords.

As for exclusionary, if you’re looking for the conservative outreach to atheists, just look for the atheist booth at CPAC. It’s somewhere near the booth for the Log Cabin Republicans.

Bill Maher thinks 95% of the world has a neurological disorder! I don’t think you’d find that on the right.

He’s a comedian using over-the-top rhetoric to make a provocative point. And plenty of atheists criticize him. He’s not our leader, either, by the way; he just happens to have a popular TV show.

And she thinks you wouldn’t find that on the right? Really?! The right tends to perceive atheists as immoral heathens carving out a path straight to hell. What “right” is she looking at?

And for that reason, I’ll say it: I think our atheists are better than yours. 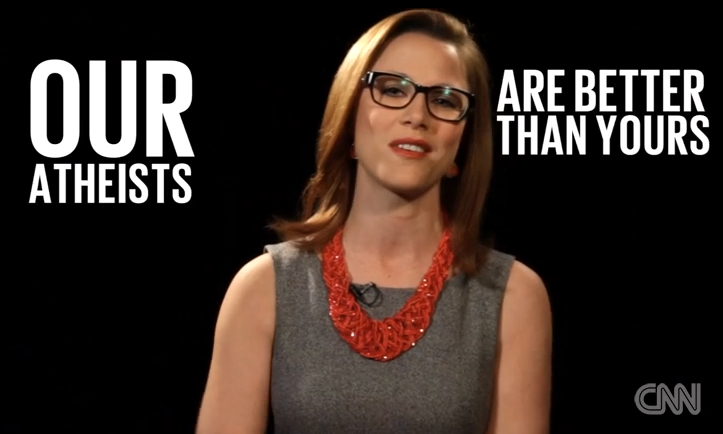 “Our atheists.” An exclusive club that includes Cupp, Edwina Rogers, and… well, that’s pretty much it.

Who knew most of us atheists were doing it wrong? Glad Cupp could set us all straight.

Because the atheist who’s ashamed of being an atheist is somehow atheisting better than all the rest of us.

Oh, and here’s some advice: When you’re making the biggest point of your video, don’t imitate Ann Coulter.