If Democrats Have This Much Support from Non-Religious Americans, Why Do They Avoid Us? July 28, 2014 Hemant Mehta

If Democrats Have This Much Support from Non-Religious Americans, Why Do They Avoid Us?

In fact, the non-religious support for Democrats is about 22% higher than it is for Republicans: 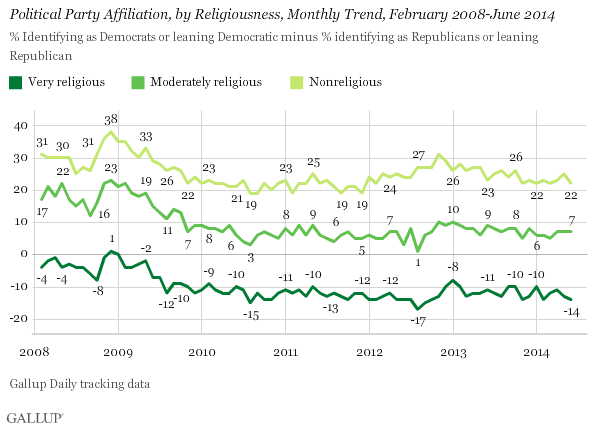 In fact, no matter how you slice up the demographics, that trend seems to hold. With one exception: When we’re talking about African Americans, they overwhelmingly support Democrats regardless of how religious they are:

The relationship between Americans’ religiousness and their party preference is a persistent and well-documented social pattern that has remained extraordinarily stable over the last six and a half years. The basic nature of the relationship — in which those who are the most religious are the most likely to identify as Republicans — has changed little. With few exceptions, Americans’ religiousness remains a major predictor of their political orientation.

From a practical politics standpoint, Republicans face the challenge of expanding their party’s appeal beyond the minority of Americans who are very religious, and appealing to Hispanics and Asians given that even the most religious of these growing groups tilt Democratic, albeit not as much as others in these groups who are less religious. Democrats face the challenge of attempting to broaden their party’s appeal beyond the base of those who are moderately or nonreligious, a tactic that most likely will require effort to frame the party’s positions on social justice and equality issues in a way that is compatible with a high degree of religiousness.

You know, a lot of non-religious Americans support Democrats because we just don’t have a better (viable) choice. But I have to laugh at the idea of Democrats broadening the base beyond our community — only because that implies they reached out to us in the first place.

While Republicans go overboard in satisfying the whims of their religious base, openly non-religious voters hardly get a hearing from the Democrats. They know we have no choice, so they can get away with it.

So let’s be clear: Both major political parties in America cater to religious Americans. The Democrats just cater to the more progressive-minded among them. And both of them avoid non-religious constituencies as if we’re going to damage their campaigns if they’re seen with us.

July 28, 2014
This Church May Want to Rethink Its Definition of "Forgiveness"
Next Post