The Hebrew term metzitzah b’peh (MBP) describes a ritual practiced by some ultra-Orthodox Jewish circumcisers in which they orally suck the blood away from an infant’s penis after cutting away his foreskin. The practice, which we previously covered here and here, is exactly as unhygienic and indefensible as it sounds, frequently resulting in the transmission of communicable diseases, and sometimes even in brain damage and death. 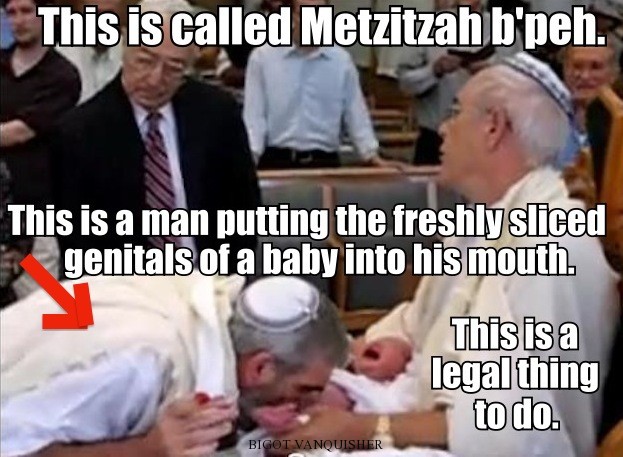 Two additional Jewish infants just received more than a circumcision — the mohels who suctioned away the blood with their mouths gave them a case of full-blown herpes.

In July 2014, the New York City Department of Health and Mental Hygiene received reports of two new cases of HSV [herpes simplex virus] infection in newborn male infants following direct orogenital suction. Since 2000, a total of 16 laboratory-confirmed cases of HSV-infection attributable to direct orogenital suction have been reported to the Health Department; three of these cases were reported in 2014 alone. Two  of the 16 infants died, and at least two others suffered brain damage.

In both of the cases reported in July, the infant boys were born to mothers with full-term pregnancies, had normal vaginal deliveries, and underwent ritual Jewish circumcision including direct orogenital suction on day of life 8.

The Jewish Daily Forward adds that

The city’s Department of Health and Mental Hygiene has tried to warn parents of the risks of MBP, which is particularly prevalent among the city’s ultra-Orthodox Jews. In January, 2013, the city instituted a regulation that forced mohels to get written consent from parents before performing the rite.

But ultra-Orthodox groups say that MBP is safe and many mohels refuse to comply with the regulation.

Since the regulation was enforced, four infants have contracted the disease.

‘Cause why bother following common sense, the Hippocratic Oath, or the law when your God commands you to place your mouth on an infant’s bleeding penis?

It seems that to these believers, infecting babies — and sometimes killing them — is a small price to pay for obeisance to your 4,000-year-old superstitions.

July 24, 2014
The Problem with "Black Jesus" Isn't Blasphemy
Next Post