Let’s get this out of the way. Black Jesus looks like a really dumb show that should be canceled because it’s not funny. 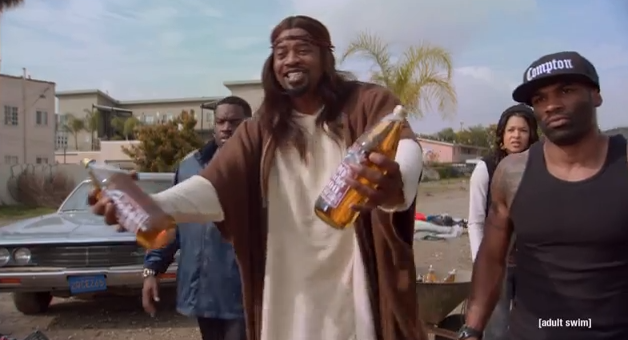 But the Christian Right group One Million Moms (Number of Twitter followers? 2706) doesn’t care about humor. They want the show off the air because it’s blasphemous:

The late night programming on the Cartoon Network, known as Adult Swim, plans to air the non-animated show “Black Jesus” portraying Jesus as a “black guy living in the hood.” The show depicts him living in Compton Gardens and makes a mockery of our Lord. The foul language used in the trailer, including using the Lord’s name in vain, is disgusting. In addition, there is violence, gunfire and other inappropriate gestures which completely misrepresent Jesus. This is blasphemy!

“Black Jesus” is set to premiere on August 7 at 11:00 pm ET/ 10:00 pm CT, unless we intervene. Adult Swim plans to blaspheme Jesus on a weekly basis. This mockery will be similar to “South Park” and “Family Guy,” but much worse since the entire program will be based on lies about Christianity.

You know what else contains lies about Christianity? The Bible.

Anyway, I have no doubt this show will be canceled soon… because it looks really, really bad. But when that happens, the 14 members of One Million Moms will act like they deserve all the credit. Believe me, this show’s demise will have nothing to do with them.

(Thanks to Lori for the link)

July 24, 2014 Two More New York Infants Given Herpes in Jewish Mouth-to-Penis Ritual
Browse Our Archives
What Are Your Thoughts?leave a comment