Last year, I posted a delightfully funny video about two parents teaching their daughter about different religions, only to have her respond with “That doesn’t make sense!” to all of them: 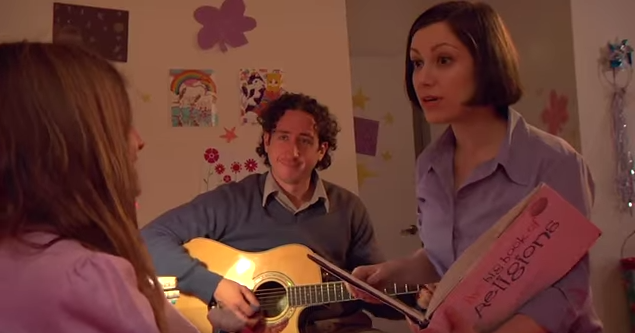 That video was made by guitarist Jonathan Hurley and actress Whitney Avalon (who played the parents) and they even won an award for it last month. Yay! Happy ending, right?

Turns out that wasn’t the case for Hurley.

He was a long-term substitute teacher at a school district in Sandwich, Massachusetts, and once administrators found out about his video last December, he was unceremoniously fired from his job — and blacklisted from subbing anywhere in the district. Why? Because… well, they had no good reason. It’s not like Hurley was talking about religion in the classroom. The fact that students could access the video online should have been irrelevant. (***Edit***: Just to clarify, it doesn’t look like anyone complained specifically about him. The administrators decided to preemptively remove him from the classroom.)

Hurley got in touch with the state’s ACLU in January and they worked together to remedy the situation. I can’t imagine it was that difficult a case. Even the town’s lawyer “very quickly acknowledged this was wrong.”

This week, I’m happy to say, the two sides agreed on a settlement:

After the ACLU of Massachusetts and the law firm of Fish & Richardson came to Hurley’s defense, the town agreed to compensate him for what was done. The town has also agreed to train administrators and teachers about teachers’ rights to speak as citizens outside of school.

“The First Amendment protects teachers’ rights to speak out as citizens on matters of public concern as long as the speech is not disruptive of the school,” said Sarah Wunsch, an ACLU of Massachusetts staff attorney. “Jonathan’s music video was made outside of school and is irreverent and questioning on the topic of religion which is a matter of public concern,” she said, “and there was nothing disruptive about it.” Wunsch also credited the school system for quickly realizing and being willing to admit that a mistake had been made, instead of digging in their heels and causing lengthy and wasteful litigation.

“Teachers can’t be constrained in their lives outside of school with administrators preventing them from having opinions and speaking out on issues,” said Adam Kessel, a principal at Fish & Richardson who handled the case pro bono. “The school principal explicitly noted in Hurley’s personnel file that the reason he was being removed as a substitute was that his website contained a song he wrote that ‘parodies various religions’ and that students ‘have access to this.’ This reason was plainly improper.”

Hurley’s records with the school district will no longer have any mention of his firing and he will receive positive references if and when he applies for another teaching position. The training for administrators and teachers — focused on free speech issues — will begin this August.

I’m not sure what Hurley’s job situation is right now, but I hope he received fair compensation from the settlement and that this incident doesn’t prevent him from making more irreverent songs in the future.

July 23, 2014 Student Opts Out of Bible Classes in New Zealand School, So He's Told To Do the Dishes Instead
Browse Our Archives
What Are Your Thoughts?leave a comment