Group That Evangelizes to Young Children Comes Under Scrutiny From Activists and Media July 23, 2014 Terry Firma

A couple of weeks ago, Hemant blogged about a international organization called the Child Evangelism Fellowship that thinks it’s cool to indoctrinate kids as young as four with talk of hell and damnation. CEF had picked relatively godless Portland, Oregon as its next battle ground, and the plan was to send more than a hundred missionaries into the city to form “Good News Clubs,” whose goal is to “harvest” children for Jesus.

A protest group, Protect Portland Children, rose to the challenge and took out an ad in the local alt-weekly to explain: 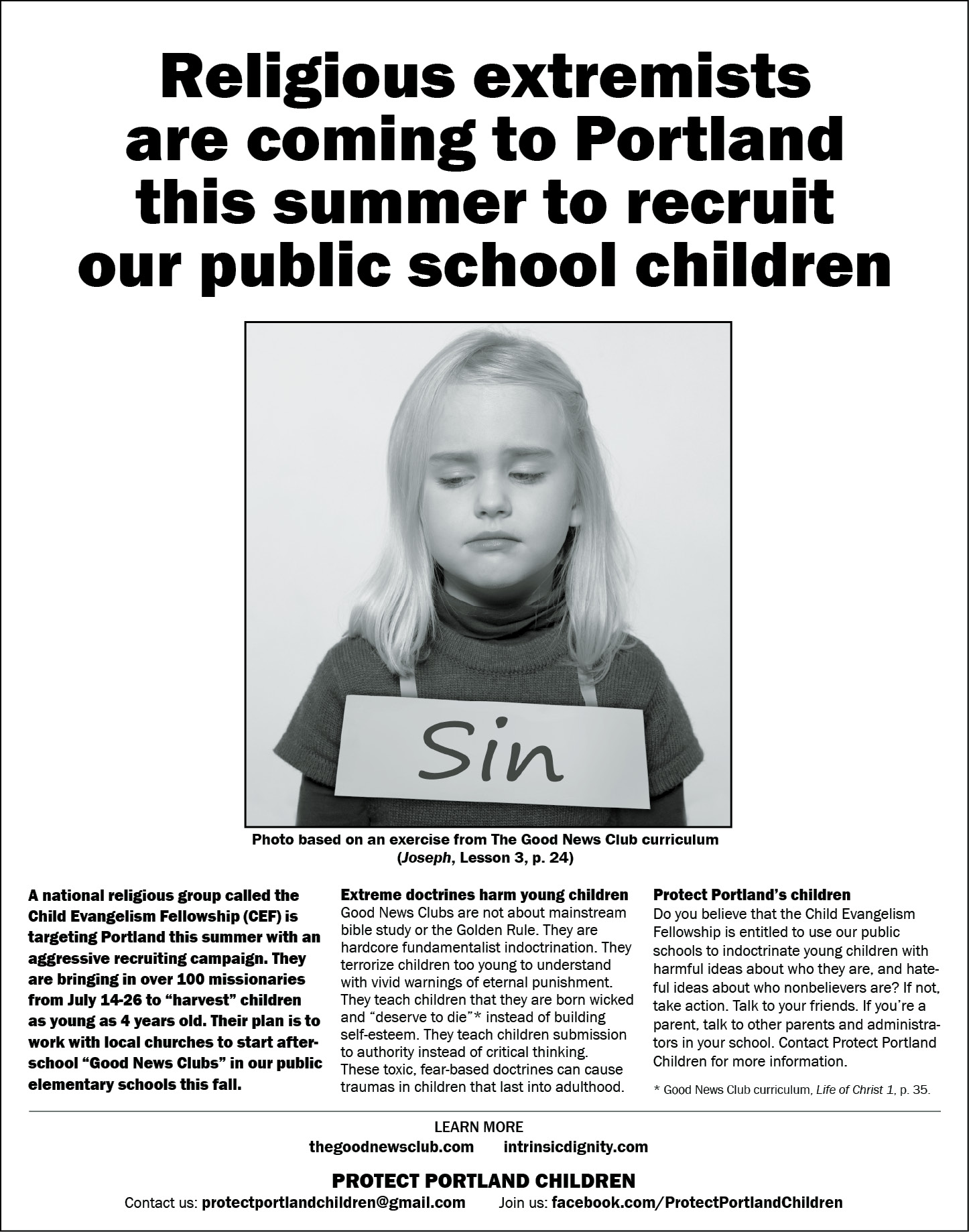 Good News Clubs are not about mainstream bible study or the Golden Rule. They are hardcore fundamentalist indoctrination. They terrorize children too young to understand with vivid warnings of eternal punishment. They teach children that they are born wicked and “deserve to die” instead of building self-esteem. They teach children submission to authority instead of critical thinking. These toxic, fear-based doctrines can cause traumas in children that last into adulthood.

Now, the Associated Press has picked up the story, and the AP account made it into a slew of newspapers, including the New York Times.

It was going to be an uphill battle for CEF all along.

Gallup polls in 2008 and 2012 have consistently indicated that Oregon is among the least religious states in the country, with one of the fewest populations identifying themselves as “very religious.”

Nonetheless, the volunteers have begun their work.

At a park on Monday, the group laid out a tarp for children and chairs for their parents. A pair of volunteers led about 12 kids through Bible verses and songs that praised a Christian god. “My heart was dark with sin,” they sang, “until the savior came in.”

What got lost a bit in the AP piece is that, while the protests are real, no one is saying that evangelists don’t have free speech rights. What’s at stake is that the people behind Protect Portland Children credibly claim that the CEF’s longer-term goal is to establish Good News Clubs in Portland public schools this fall, as the fundamentalists have done in other cities. Sure, parents would need to give written permission for their kids to attend such school gatherings, but critics charge that CEF is underhanded and stealthy about the aggressive, everything-is-a-sin fundamentalism that it really teaches.

The journalist Katherine Stewart (below), author of The Good News Club: The Christian Right’s Stealth Assault on America’s Children, explains it in this video. 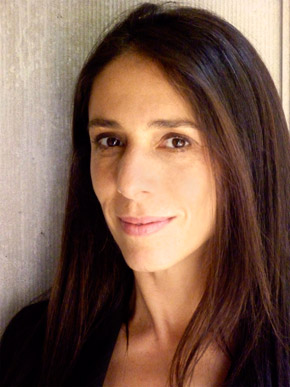 Kids attending the Clubs were targeting their non-Christian peers or their friends for what I can only describe as faith-based bullying. And I also heard stories from parents whose kids would come home telling their parents that they were going to go to hell, because they didn’t go to the right kind of church. I began to realize that the Clubs seek to convey the unavoidable impression in small children that their activities are endorsed by the school. The kids would say they knew the religion of the Good News Club must be true because they learned it in school. Remember, we’re talking about little kids here. No institution has as much authority for them as the public school.

In public places like parks, where no permission slips are needed, skepticism might flow a little more freely. Consider the AP article’s ending:

Mia Marceau, a mother of two in the Portland suburb of Vancouver, Washington, said she was intrigued when the group approached her apartment complex pool last week. She said she, too, believes in Jesus Christ. Within a few hours, however, she didn’t like what the group was telling her 8-year-old son and his friends: They were headed to hell, needed to convert their friends and were duty-bound to raise money for the organization.

I raised a free thinker,” she said. “He didn’t buy in. All of a sudden, he’s having arguments with his friends over salvation.”

That kid’s going to be all right.

July 23, 2014
Michigan Mayor Who Denied a "Reason Station" in City Hall (but Allowed a "Prayer Station") Hit with Federal Lawsuit
Next Post

July 23, 2014 Hindu Gods Get a Muscular Makeover in Graphic Novels
Browse Our Archives
What Are Your Thoughts?leave a comment