It’s really hard for me to get caught up on the details of the invasion of Gaza by Israel over the last couple of weeks. Growing up in conservative Christianity, we had a myopic, distanced, and deliberately ignorant understanding of politics in the Middle East, and so now, I find myself at a loss for where to start in understanding news reports like this one:

Over 350 Palestinians have been killed in Israel’s ongoing operation to root out Hamas fighters it says are hiding in Gaza tunnels. Meanwhile, tens of thousands came out to protest the victims of the invasion, almost 80 percent of whom are civilians.

The United Nations mission in Gaza says that more than 60,000 people have been displaced as a result of the escalating conflict. Israel has warned Palestinians living in over half of the country that they may come under fire either from the ground, air or sea.

Together with the mounting death toll, the Palestinian health authorities say that over 2,000 people have been injured. Around a quarter of the reported victims have been children.

The bloodshed is grievous and I wish I understood more of what was going on. The understanding I grew up with was a primitive and ahistorical one that went like this:

Israel (the Jews) were God’s chosen people according to the Bible (which we believed was inerrant). God said in the Bible that he was giving them the geographical land of Canaan for their home (elide the narrative bits in Joshua and Judges about the Israel-lead genocide of the natives), and the land would belong to the Jews and their descendants for the rest of known history. And the Jews believe in the same God we do, so we need to support them in keeping their homeland. The end.

I even knew conservative Christians who were so enamored with Israel that they appropriated Jewish traditions for their Christian practices and called themselves “Messianic” Jews — a concept that has always made me distinctly uncomfortable. To a lesser extent, I also grew up with the uncomfortable awareness that my parents (of German descent) chose to name me with an anglicization of the Hebrew pronunciation of the name Hannah, partly because they liked the sound, and partly because of their specific practice of faith. It’s unique, but it’s also cultural appropriation and I have to live with that.

I’m pretty disappointed that this Christian-centric narrative is all I knew of Palestine and Israel growing up and that my education hasn’t been significantly improved on the subject since. But also, I’m realizing that this mindset is a pretty old one among American Christians. Curious how far back this goes, I dug around and found a press release from 1967 about Billy Graham and the Six Day War:

Mr. Graham revealed that, during and immediately after the Six-Day Mideast war, he had been in touch privately with American political figures, urging support for Israel’s right to survival. He said he had delayed making any public statements because of the pleas of evangelical Christians in Arab countries who feared reprisal from their host governments. “The Jews are God’s chosen people,” Mr. Graham declared in the article. “We cannot place ourselves in opposition to Israel without detriment to ourselves.”

This mindset hasn’t gone away, though. This simplistic mindset is the one I learned in the 90s, and we’re still arguing these points today in the American Christian community: 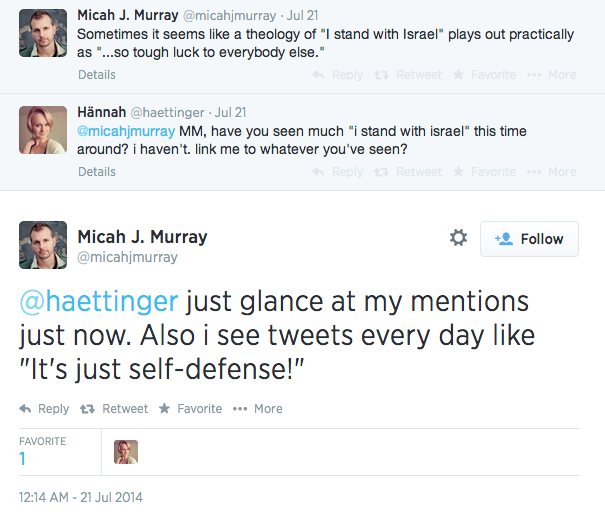 Obviously, things need to change in how Christians see the Israel narrative, and I grew up with a single story. So: where should I (and others who have a similarly limited knowledge of the conflict) start to fix my education on this subject? Your feedback is appreciated, especially so I don’t have to avoid all conversations about a very important topic:

July 23, 2014
Student Opts Out of Bible Classes in New Zealand School, So He's Told To Do the Dishes Instead
Next Post