Creationist Ken Ham: We Should Stop Exploring Space Because the Bible Says Aliens Would Go to Hell July 21, 2014 Hemant Mehta

Creationist Ken Ham: We Should Stop Exploring Space Because the Bible Says Aliens Would Go to Hell

One of the criticisms of Creationism (besides the whole “it’s wrong” thing) is that it stifles curiosity. “God did it” not only doesn’t answer anything, it stops you from seeking out actual answers.

Science, on the other hand, is all about searching and explaining the unknown. The answers we seek may not be discovered anytime soon, but that’s part of the process. That’s why we explore space and search for extraterrestrial life. Who knows what we’ll find?! 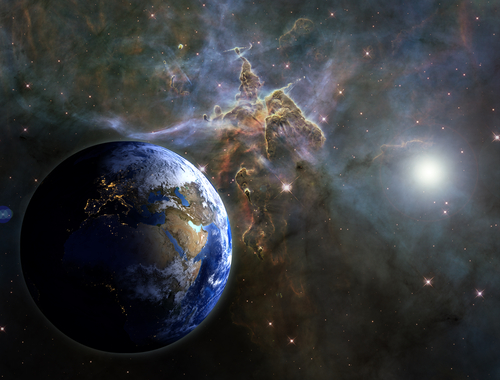 Creationist Ken Ham doesn’t understand any of this. He thinks he knows the real reason we go into space:

Of course, secularists are desperate to find life in outer space, as they believe that would provide evidence that life can evolve in different locations and given the supposed right conditions! The search for extraterrestrial life is really driven by man’s rebellion against God in a desperate attempt to supposedly prove evolution!

That’s… so obviously not true. We don’t need to prove evolution anymore. It’s as verified as it needs to be. We’re good. And if we ever were to discover alien life, the one thing we know is that those creatures would be the product of evolution.

Ham says it’s all just a waste of money since the Bible already has the answers. We even know what would happen to aliens after death:

… I do believe there can’t be other intelligent beings in outer space because of the meaning of the gospel. You see, the Bible makes it clear that Adam’s sin affected the whole universe. This means that any aliens would also be affected by Adam’s sin, but because they are not Adam’s descendants, they can’t have salvation. One day, the whole universe will be judged by fire, and there will be a new heavens and earth. God’s Son stepped into history to be Jesus Christ, the “Godman,” to be our relative, and to be the perfect sacrifice for sin — the Savior of mankind.

Jesus Christ, Ken Ham is talking about the eternal damnation of alien life forms. They’re all going to hell, apparently, and why go in search of life on other planets if they’re all doomed to a lake of fire?

We’re lucky people like him weren’t working at NASA 45 years ago.

To whine about the pittance we spend on space exploration because “Christians certainly shouldn’t expect alien life to be cropping up across the universe” has to be a new low even for him.

July 21, 2014
Rapper Hopsin's Latest Single, About the Problems with Christianity, Has Gone Viral
Next Post

July 21, 2014 Christian Candidate for TN County Commission Slams Muslim Opponent for Not Being Patriotic Enough
Browse Our Archives
What Are Your Thoughts?leave a comment