This Is What Religious Indoctrination Looks Like, Courtesy of a Christian Summer Camp July 20, 2014 Hemant Mehta

This Is What Religious Indoctrination Looks Like, Courtesy of a Christian Summer Camp

When little children throw their hands in the air, stream tears down their faces, and attempt to speak in tongues at the behest of adults around them, is it out of sincere religious conviction or peer pressure?

The correct answer is: Who cares; You should be horrified by this: 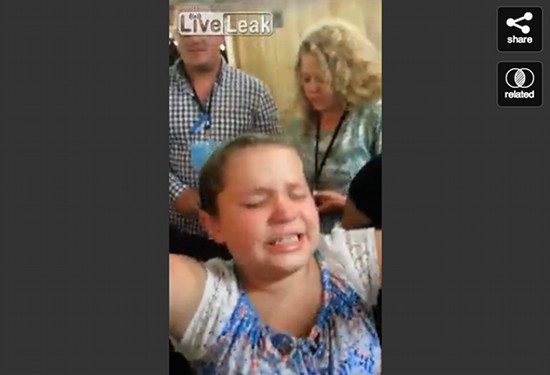 That video comes from the Rose of Sharon Camp in Burlison, Tennessee. The story of how it got online is fascinating. One of the counselors at that camp uploaded the video to Facebook — parents had to sign a waiver saying their kids could be taped for promotional purposes — along with this message: 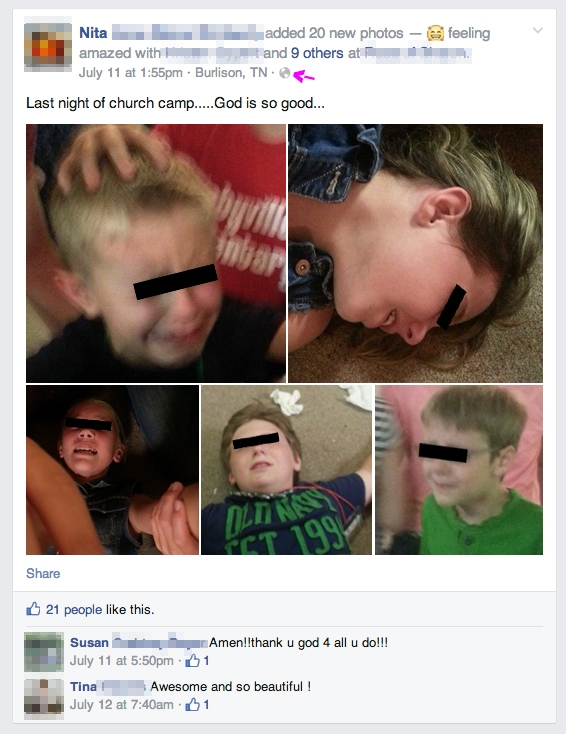 Turns out that post was shared with someone who was disgusted by what s/he saw and it was forwarded to the folks at Awkward Moments Bible, who posted it on their own Facebook page… and then all hell broke loose. One of the most intriguing reactions came from a parent whose child attended the camp:

My daughter was at camp when the pictures were taken last week. I am a Christian and raised Baptist. Never once did I EVER witness the likes of this! Pictures of my daughter were also posted on the woman’s page. Pictures of her crying and in very apparent emotional distress. When asked about the pictures of her, her response was that she was TOLD to pray with the other children, so she did. I asked why she was crying and she responded with, “Other kids were crying, it made me cry too.” So, please explain to be how children who are ENCOURAGED TO COPY what they are seeing other adults and children do without rhyme or reason or instruction is healthy? You cant. And when it ISN’T healthy, it becomes a form of abuse. Period. Emotional abuse has occurred that could scar these children for life.

I couldn’t agree more. This is just manipulation by the adults. It’s not like speaking in tongues is a special God-given gift. It’s a trick that must be taught. I know atheists who once believed they could do it — and if they get themselves in the right mental state, they can start speaking in tongues again. It’s a neat little parlor trick with them.

But with these kids, it’s flat-out disturbing. It’s not like they know what they’re doing; they’re just being pressured into going along with the crowd. We saw it earlier this month, too, with children who didn’t know they were supposed to “fall backwards” when a preacher touched their foreheads. I don’t know where the line, if any, should be drawn — it’s not like anything illegal is happening — but I don’t understand how any decent parent would find this sort of practice acceptable.

July 20, 2014
Mass Shootings Occur Because the Killers Don't Believe in the Afterlife, Says Writer Who Makes Shit Up
Next Post