Southern Baptist Convention Leader Richard Land: Out to Pasture, But Not Irrelevant

A profile of old guard conservative Southern Baptist leader Richard Land (below) in the National Journal reveals some interesting connections about how he drove the shift in conservative Christian politics over the last 10 years and the current Southern Baptist community’s evolution since his heyday. 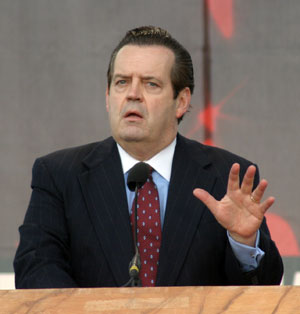 Called “God’s Lobbyist” by TIME magazine, Land was pivotal to shifting the moderate Southern Baptists of the late 70s and early 80s to a firm line of conservative Christians with an eye toward aggressive political engagement, especially on issues of sexuality and reproduction.

In the NJ profile, Land talks about getting the Southern Baptists to engage politics for Jesus:

“Pietism, or withdrawal from the culture, has always been a big temptation for American evangelicals,” he says. “It took a lot to convince them to jettison that pietism and get involved, number one. It took a lot for most of them to do so primarily through the Republican Party, because most of them were not raised Republican.”

What he calls “pietism” is largely driven by the apathy impulse of Christians to insulate themselves in their own culture. His brusque and offensive personality perhaps lent itself to an aggressive style of staking his claim on being an American practicing a conservative Christian faith, and he drove a gently evolving community to become a rigid bastion of moralistic ideology.

What’s funny to me is that this is the other side of the coin from the isolationist Christian homeschooler rhetoric I grew up with. Both reject apathy and take strong stands against mainstream culture, declaring it impure and in need of reform. But Land’s action plan involved conquering and changing, while the Christian homeschool action plan was to withdraw and create a strong alternative culture. Both saw their purpose as a sort of spiritual warfare.

In the profile, Land described his fears for the millennials in the Southern Baptist Convention:

Training a new generation — and perhaps seeking to make them as aggressive as he once was — may be a better way for Land to influence the future of the movement he helped to build. “What we’re now seeing is a transition from combat-troop leadership to occupation-troop leadership,” Land says of the generational shift from offense to defense. But he warns, “Peacetime armies aren’t as disciplined, vigilant, or well trained as armies that have been in combat.”

After Land came into the Southern Baptist Convention as President, he put this battle-lines thinking into play, cleaning house (much like Al Mohler did at Southern Baptist Theological Seminary):

Within a generation, the Southern Baptist leadership had gone from being loosely for abortion rights to being staunchly antiabortion. Seminary professors, along with other church staff members, were fired or resigned when they did not adhere to the new conservative doctrine. Southern Baptist women were stripped of their right to pastor churches, though they had been ordained in limited numbers since 1964. The leadership issued statements codifying a number of beliefs: that wives should submit to their husbands, that homosexuality and abortion are wrong, that the Bible is without error.

Make no mistake, the recent Hobby Lobby victory in the name of “religious freedom” is a direct result of the work Land did during his presidency. The Hobby Lobby owners, the Greens, are strong supporters of Land’s successor, the slightly-more-tactful Dr. Russell Moore.

The Southern Baptist Convention is likely preoccupied with not scaring away members right now — they’re in a steady decline — so having Land out to pasture at Southern Evangelical Seminary is a good move. But the end game hasn’t changed much: women will be put in positions of dependence on men for their faith and their home lives, sexuality must run as straight and married as train tracks, and anything science-y about birth control will be ignored in favor of grumbling about “abortifacients.”

July 19, 2014
An Exclusive First Look Inside the Bible Museum's Gift Shop
Next Post

July 19, 2014 Woman Lets Jesus Take the Wheel... and Nearly Kills Motorcyclist
Browse Our Archives
What Are Your Thoughts?leave a comment