Five- and six-year-old children know that George Washington was a real person and Snow White is fictional. 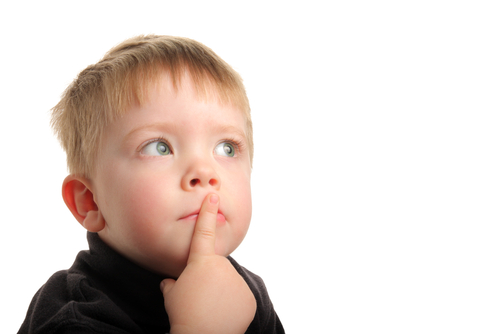 But what if you told them this story?

God warned Noah about a flood that was going to cover the Earth. Noah and his wife built a giant boat and gathered two of every kind of animal before the flood came. They were very worried but Noah, his family, and all the animals drifted for days until they reached new land.

A new study published in the journal Cognitive Science explored that very question. Without going into too much detail, researchers gathered 5- and 6-year-olds and divided them up into four groups:

Now, here’s what *should* have happened:

When the kids heard the realistic stories, they should have said the character seemed real. Turns out they all did that!

When the kids heard the fantastical stories, they should have said the character seemed pretend. The kids were all over the place here… but they generally did that.

When the kids heard the religious stories, they should have said the character was pretend. Let’s see how that went: 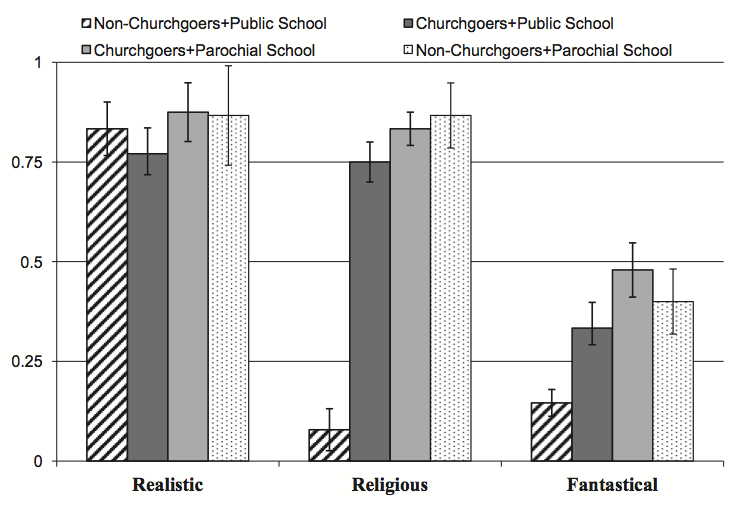 In that picture, on the vertical axis, 0 means pretend and 1 means real. So, when it comes to the realistic stories, all the bars are pretty close to 1.

But look at that middle chunk representing the religious stories. Only one group, the bar on the left, correctly said those stories were pretend: The non-church-going kids who attended public school.

Even with the fantastical stories, that same group was most likely to say they were pretend.

The researchers say these results throw that whole theory that children are “born believers” right out the window:

Our central question concerned children’s judgments about the status of story characters in religious stories. Children with exposure to religion — via church attendance, parochial schooling, or both — judged such characters to be real. By contrast, children with no such exposure judged them to be pretend. This sharp discrepancy between children with and without exposure to religion lends no support to the hypothesis that children are “born believers”… with a natural credulity toward extraordinary beings with superhuman powers. Indeed, secular children responded to religious stories in much the same way as they responded to fantastical stories — they judged the protagonist to be pretend.

They read the kids different kinds of stories, all based on a classic Bible tale. For example, here’s a simplified version of how they used the Moses story:

Once again, the kids were supposed to separate whichever story they heard into “real” or “pretend.” (In this case, all of the stories were “pretend” because you can’t part a sea or mountain.)

How did they do? Keep in mind that 0 means pretend and 1 means real, so they should have had lower numbers down the line… 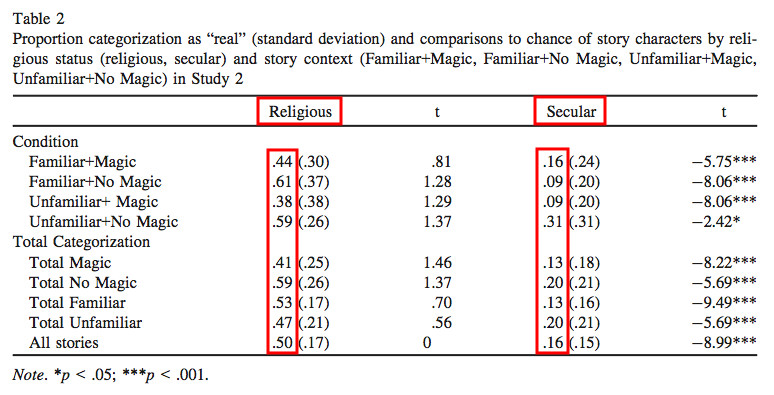 Whoa. In every single instance, the secular group had lower scores than the religious group (meaning they were more correct).

What’s up with these results, researchers?

… in both studies, secular children systematically categorized the characters embedded in fantastical stories as pretend, and most of their justifications referred to the impossibility of a central event in the story. Effectively, secular children responded to these stories just as they might respond to a fairy story — they inferred that the central characters were fictional because they were involved in an event that is ordinarily impossible in reality. The pattern of responding for children exposed to religion was different. In both studies, they [children exposed to religion] were less likely to judge the characters in the fantastical stories as pretend, and in line with this equivocation, they made more appeals to reality and fewer appeals to impossibility than did secular children.

In short, kids exposed to religion believed the stories with magical/supernatural aspects to it because they didn’t think those things were impossible.

Religion blurs the lines between fact and fiction. You only hope kids exposed to it figure it out soon enough.

Unfortunately, not all of them do. We know there are adults who never learn the difference between fact and fiction. We call them Creationists. (And some of them even get elected to public office!)

It’s just more evidence for those who believe religious indoctrination is a form of mental child abuse.

By the way, there are a couple methodological concerns with the study (freely admitted by the researchers). First, they took the kids at their word about whether or not they attended church. Second, it’s possible that other factors — not simply exposure to religion — caused the difference in perception between fact and fiction. The researchers believe, however, that neither of those concerns played a significant role in their study.

July 18, 2014
News Anchor Offers His Take on Psychic Reading: "Awful! Not Even Close!"
Next Post