Has This Happened To You? A Friend Paid Me a Backhanded Compliment: “You’re One of the Good Atheists.” July 18, 2014 Terry Firma

Has This Happened To You? A Friend Paid Me a Backhanded Compliment: “You’re One of the Good Atheists.”

I consider Craig a friend of the family, mostly because “acquaintance of the family” is a weird term. We’re not close, but I’ve known Craig for six or seven years. He’s intelligent and affectionate and entrepreneurial and geeky and a little high-strung, a fast-talking man of ideas who is designing and building his own quadcopter — one that, he says, is big enough to take his 175-pound frame into the skies. Every summer, Craig vacations on the East Coast island where I live. Then he disappears back home to California, and I don’t see him for 10 or 11 months.

He dropped by unannounced the other day, as he sometimes does. I don’t think we’d ever discussed religion or atheism, though I must have mentioned at some point that I’m not a believer. Apparently, that made an impression on Craig.

He sums up his genuinely warm feelings with a “Good to see you buddy” as we stand talking in my kitchen. And then, out of the clear blue sky, he adds: “You’re my favorite atheist.”

I think I arched an eyebrow. Maybe two.

“Yeah man. You know how I figured out that you’re one of the good ones?” 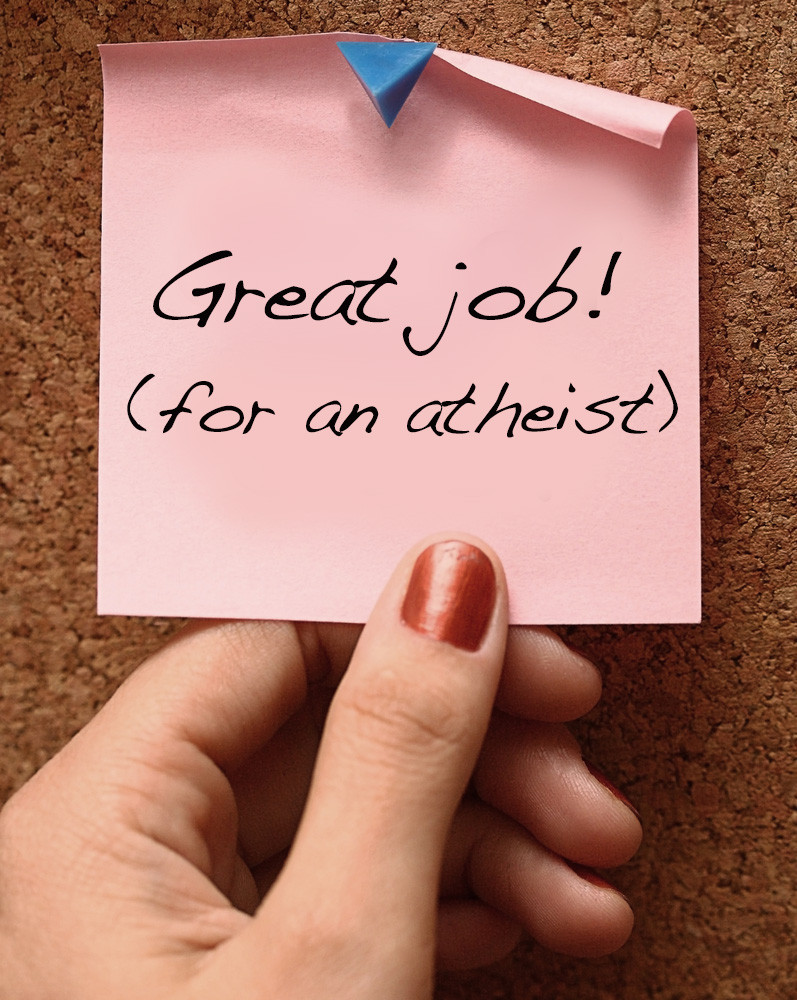 He means it in the best possible way. I can tell. But we’re on thin ice, because the subtext is clear — I am one of the few good atheists. An exception.

He reminds me of the jovial Mississippi father of the bride who told me he was friends with the two African-American musicians he’d flown in to entertain the wedding guests: “I don’t like to associate with black folks much, but John and Miriam are good, hardworking people.”

Smiling, I tell Craig that no, I don’t know how he came to his conclusion.

“Because a few years ago, you told me about a dog — it wasn’t even your dog — who was put to death at the shelter, and you began tearing up.”

I remember that. My family had offered to give a friendly, lumbering Saint Bernard named Baxter a good home. The SPCA turned us down. We weren’t deemed suitable because we had children under 12. Unbelievably, none of the SPCA shelter dogs we looked at were cleared to be adopted by families with preteens. It didn’t matter that our kids grew up around dogs, including our two German shepherds.

A few months months later, I heard from a volunteer at the supposedly no-kill shelter that Baxter had been euthanized because “no one wanted him.”

I’d told some people how upset I was, Craig among them. He remembers that my voice cracked when I spoke of Baxter. And that’s how he knew I am not a terrible human being.

I have no idea what Craig’s metaphysical view of the world is, and how religion fits into that. I do know that I would be selling him short if I attributed a lack of empathy to him based on whatever that belief is. If someone exhibits a common emotion, it would be prejudicial to say to yourself, “I wasn’t expecting that from a Christian,” or “That’s surprising for a Jew.”

Craig wasn’t even muttering that sentiment to himself. He felt free to say it to me, to my face — that I’m a good atheist because I showed a flash of sorrow about the death of a sentient fellow being.

I don’t live my life looking for things to take umbrage at, and I won’t now. Craig’s sincere if accidentally backhanded compliment won’t keep me up at night. But as soft anti-atheist bigotry goes, it sure was a memorable moment.

Have you experienced anything similar? How did you respond? Let us know in the comments.

July 18, 2014
New Study Shows That Children Exposed to Religion Have a Hard Time Distinguishing Fact from Fiction
Next Post