Andrew Thomas (below), a Republican candidate to become the next governor of Arizona, said something during last night’s debate that I think all of you are going to appreciate… for reasons that would infuriate him. 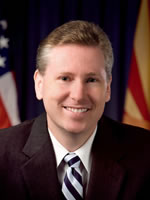 Thomas, who was disbarred by the state’s Supreme Court in 2012 for “disgracefully misus[ing] the law,” was supposed to be talking about how to keep college affordable.

Instead, he began rambling about how liberals “brainwash” students:

As evidence, Thomas, who is a Harvard Law School graduate, cited studies that found as respondents earned higher degrees of education, they were less likely to want public school teachers leading students in prayer.

“Higher education has become essentially a scam in this country,” he said.

Umm… maybe they don’t want teachers leading classroom prayers because the more education they have, the more they realize that prayer ain’t gonna fix anything.

Also, you know, it’s illegal. (You’d think a Harvard Law grad would’ve figured that one out by now…)

I know it’s a constant refrain on this site, but you can’t spell crazy without R-AZ. Thomas fits the bill.

***Update***: You can read more of Thomas’ statements about education here, from a speech given this past January.

July 17, 2014
Chicago Non-Theistic Communities Answer the Question of What to Do After Members Stop Believing in God
Next Post