A Kickstarter for a Webcomic About Science and Pseudoscience July 17, 2014 Jessica Bluemke

A Kickstarter for a Webcomic About Science and Pseudoscience

As is the way of things these days, a talented individual has turned to Kickstarter to fund his project.

I had the pleasure of meeting Kyle Sanders at TAM 2013, where he told me about Carbon Dating, a webcomic that he’d been working on for about six months at the time. It’s all about science, pseudoscience, and geeky relationships — and it’s delightful.

This year, when we met again at TAM 2014, he was thrilled to tell me all about his newest pet project. While we were in Las Vegas, he launched a Kickstarter campaign with the aim of raising $3,000 so he can release his comic (which is currently out Tuesdays and Fridays) every day. In just three days, he met his goal, so he’s established a couple of stretch goals. At $4,500 he’ll launch a podcast, and at $6,000 the comic will be in full color.

I wholeheartedly encourage you to head over to his Kickstarter page and pitch in a few bucks, or just check out Carbon-Comic.com and enjoy what he has up already. Kyle is an extremely talented guy, and he even drew an adorable comic of Mikey and I as an engagement present that I shall self indulgently show off to you now: 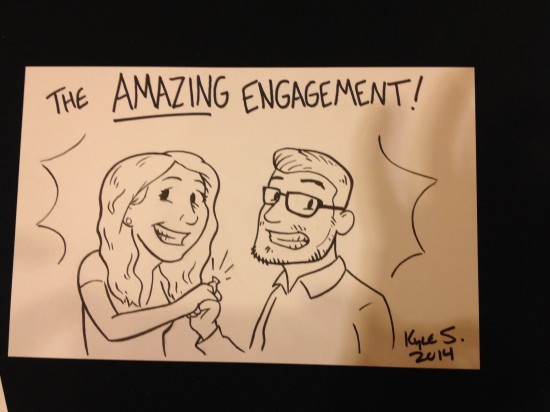 It’s currently framed in our apartment and I’m obsessed with it.

Support Kyle! He’s getting a positive message out in a fun, clever way!

July 18, 2014 10 Memorable Moments When Religion Was Criticized on TV. The First Clip Shocked Me
Browse Our Archives
What Are Your Thoughts?leave a comment