In the Religion Popularity Contest, Atheists are in a Statistical Tie for Last Place… but There’s Hope! July 16, 2014 Hemant Mehta

In the Religion Popularity Contest, Atheists are in a Statistical Tie for Last Place… but There’s Hope!

According to a new survey published by the Pew Research Center, atheists are pretty much the least popular religious group in America, in a statistical tie with Muslims:

In one of the more interesting aspects of the survey, when you removed Evangelicals from the survey, their own approval rating dropped from 61 to 52, suggesting that Evangelicals think much more highly of themselves than the rest of us do. (No other group’s numbers dropped nearly as much when their own followers were taken out of the picture.)

We also found out which groups like and dislike which other groups.

No one loves themselves as much as Jews love other Jews, giving themselves an approval rating of 89.

Meanwhile, when it comes to dislike, Atheists really don’t get along with Evangelicals, giving them an approval rating of only 28. The only ranking lower than that was the one White Evangelicals gave to Atheists: 25. 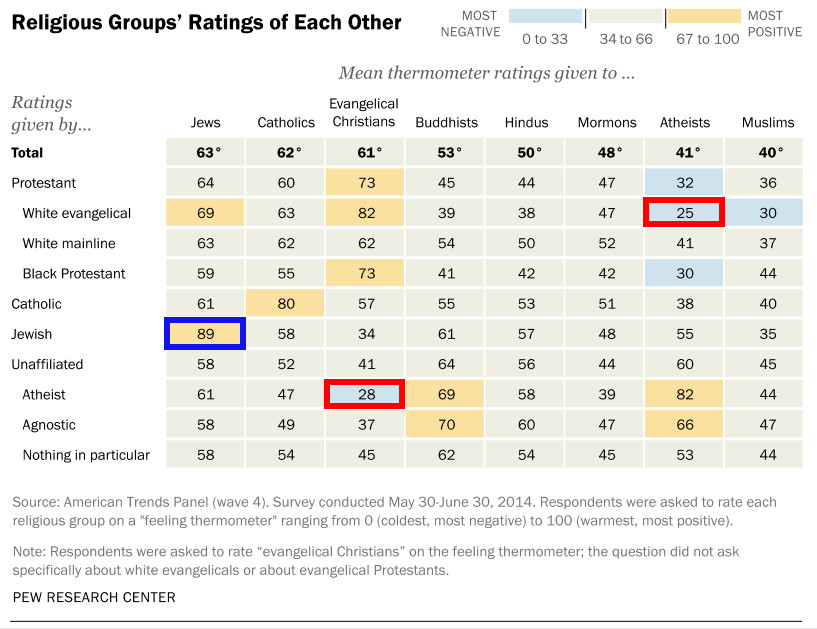 You know who *really* doesn’t like us? Republicans. They gave us an approval rating of 34 (Only Muslims were lower with a score of 33).

But it’s not like Democrats are on our side, either. They gave us a 46 (compared to Muslims’ 47). I was surprised to see that Democrats ranked Mormons lower than us (44). Maybe that’s some Mitt Romney residue:

This is why it’s so hard for us to make political inroads with either group. We know we have very little chance of getting Republicans to listen to us… but even the Democrats want to keep us at a distance. If we can’t convince them to take us seriously, if we can’t provide one party with a solid voting bloc, it makes it that much easier for them to dismiss our issues.

There are some bright spots for us, though. Atheists are one of the few groups getting a higher approval rating among younger people. In fact, the younger the demographic, the higher our likability. 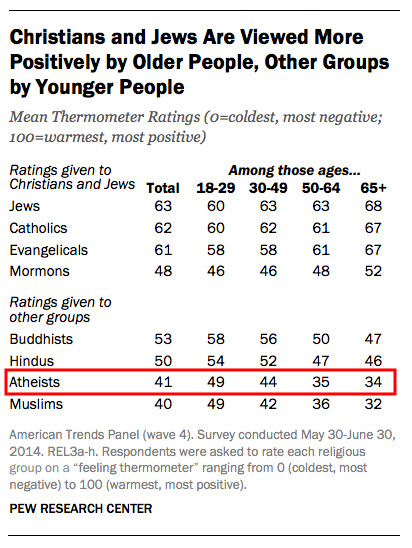 And more people know an atheist! We’ve long said that, parallel to the gay rights movement, people who know an atheist personally are far less likely to demonize us. And 59% of Americans say they know someone who’s an atheist, making us more visible than Mormons, Muslims, Buddhists, and Hindus:

(I should mention that the number is probably much higher than 59%. Atheists are everywhere, but many of us are closeted. So the vast majority of Americans probably know an atheist. They just don’t know that they know an atheist.)

This is a huge factor. Among people who knew an atheist personally, our approval rating is 50. Among those who claim they don’t know any atheists, it drops to 29, the lowest number among all groups. Visibility is *huge*. 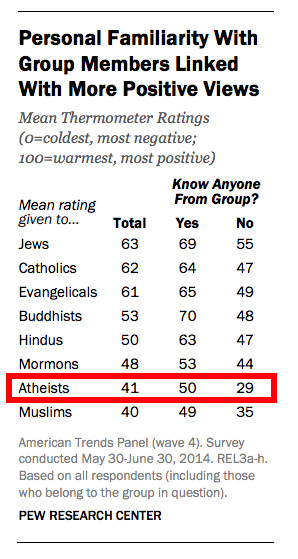 Overall, the numbers aren’t very different from what I would’ve guessed, but it’s always striking to see them in context of other groups. The issue, to me, is one of ignorance and stereotyping more than anything else. Most people who dislike atheists feel that way because they equate godlessness with immorality and evil. That changes when they get to know us personally.

The exception to that rule? Evangelicals, who see us as ideological enemies. Atheists could be good people, but it wouldn’t matter to them, because our views on social issues tend to stand in opposition to everything they support. But that obviously goes the other way, too.

Editors’ Note: This article is part of the Public Square 2014 Summer Series: Conversations on Religious Trends. Read other perspectives from the Atheist community here.

July 16, 2014
A Judge Dismissed FFRF's Lawsuit to Distribute Atheist Books in a Florida School District, but It's Still a Victory
Next Post