This is How You Should Tweet When Your Baseball Team Runs a Promotion with an Atheist Group July 15, 2014 Hemant Mehta

On Friday night, the St. Paul Saints minor league baseball team became the Mr. Paul Aints as part of a promotion with the Minnesota Atheists, the third time they’ve partnered up. 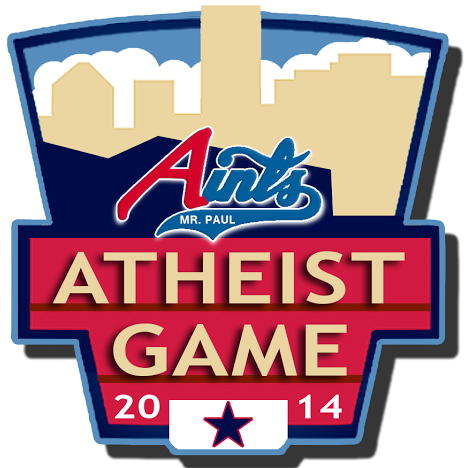 What I didn’t realize was that the person behind the team’s Twitter account would join in on the fun:

At least there was a happy ending to the game!

Outside the stadium, though, Christians were hard at work undoing the “damage,” leaving all sorts of Jesus-y tracts on windshields. A couple of atheists scooped them up:

Not the team’s fault, of course. For what it’s worth, on Sunday, the Saints held a Faith & Family Day promotion and the tweeter was right back at it:

Last night, I spoke with the person behind the Twitter account (who isn’t an atheist, by the way) and was told it was all in good fun and that there was no backlash from the tweets. It’s good to know Saints fans appreciate the sarcasm and humor even if they don’t necessarily agree with the theology. For that reason alone, I hope Minnesota Atheists continues the promotion again next year; this is a fun group of people to work with.